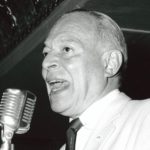 For 30 years (begining in 1942), Al Sobel’s columns, under the headings 30 Days, 60 Days, or 360 Days, were one of the most popular features of the Bulletin. The annual Sobel masterpieces served as a summary (albeit a somewhat subjective one) of the proceeding year’s doings in the world of tournament bridge.

The year 1968 was a notable one for me. It marked the 35th since I started with the League. My official retirement date was April 1st, but this was a real April Fool’s Day. I’ve worked harder since I retired than when I was on the payroll.

For Instance, my “retirement” jobs included: directing the Summer Nationals at Minneapolis; one of three co-directors at the World Bridge Olympiad at Deauville, France; director at the trials in Atlantic City; a three-week 8,000 mile hegira to St. John’s, Newfoundland, Anchorage AK, and Gatlinburg TN; last, but certainly not least, a six-week “Travel with Goren” cruise with Mitch Barnes to the South Seas and Australia. You’ll read more about this safari in my next column.

1968 was an important year for the League also. Let us review the year and then I will award the Sobell Prizes for meritorious performances.

1968. The year Easley Blackwood took over as Executive Secretary and General Manager of the League and turned a $60,000 loss into a $190,000 profit. He must be a whale of a rubber bridge player!

1968. The last time (I hope) the League held the Trials. And now that we’ve seen the finish of this type of game, I can express my opinion. Good riddance to a bad method of choosing our International representatives. I applaud the members of the board who voted for change.

1968. The first time I missed a Nationals since 1933. After I received, aboard ship, a detailed report about Coronado I was kind of glad I hadn’t been there. I understand the Hong Kong flu eliminated more pairs than bad bridge!

1968. The year we closed our Western office. I hear by the underground that this move has raised quite a ruckus. I’m not familiar with the details but I understand that this will save the League $18,000 a month. Paraphrasing W.C. Fields — anything that saves $216,000 a year can’t be all bad.

1968. The year that we took part in the saga of The Plane to Nowhere. This is the story of 40 bridge players, relatives of same, and officials and rooters who checked in at the Kennedy Airport in New York City to travel to Geneva, Switzerland via London for the Olympiad, to learn that we were not going to Geneva but to Deauville. The tourney had originally been scheduled there but due to the general strike and riots in France it had been re-assigned to various places. Theses changes of locale kept two countries , Poland and Nationalist China, out of the Olympiad because they couldn’t change their visas in time. It also almost kept the American team out but that’s a story in itself.

1968. The necrology list this year included Paul Marks of Chicago, one of the best tournament directors in bridge history. Maurice Harrison-Gray of England, a great bridge player, writer and lecturer. Kenneth Konstam, columnist of the London Sunday Times and member of dozens of international championship teams. And many more. All of them are gone but not forgotten.

And that was the year that was. I will now award the Sobell Prizes and let the accolades fall where they may.

The player of the Year. This may be a surprise since it goes to Barry Crane who, for the umpteenth year, did not quite win the McKenney Trophy. For the benefit of our new members this award is for the most masterpoints won during the year. Barry, who has won the McKenney twice, including 1967, didn’t even finish in the customary runner-up spot, although as usual he was leading the parade at the three-quarter mark. But Barry’s main career isn’t bridge. He made the race while holding down a full-time job as associate producer of two network shows for CBS. Mission Impossible and Mannix. The name of the first show proved prophetic for Barry’s McKenney chances. I hope it may be consolation that Barry Crane of California gets a well-earned Sobell Prize.

Team of the Year. This award goes to our 1968 Olympiad team — in alphabetical order, Robert Jordan – Edgar Kaplan – Norman Kay – Arthur Robinson – William Root and Alvin Roth. They put up a magnificent performance as a team both in the United States and in France. With six boards to go they had the Italians on the run, and I thought that they were surely going to end the fabulous Blue Team’s reign. It’s going to break me, but six Sobell Prizes to the almost giant killers. Which leads me to the

I hate to do it but a Sobell Prize to Signor Pabis Ticci for the lead of the ♣A that put the skids under our boys. (See full deal from August 1968)

Sportswoman of the Year. This award goes to Dorothy Hayden of Hastings-on-Hudson, NY. She was playing in the Women’s Life Master Pairs at the recent Fall Nationals and about the eighth round she picked up a hand that looked vaguely familiar. She waited for another round and this time looked at a hand that she definitely recognized. She had played these hands in the Trials at Atlantic City two months earlier! (See “hand o’ the Month in this issue) Somehow or another our vaunted computer system had either repeated itself (which is about a few billion to one) or an extra set of those hands had been preserved and somehow packed with the other duplicated hands for the Nationals. Dorothy didn’t have to say anything about this because no one else could have discovered it except maybe the press, since Dorothy was the only woman who had played in the Trials. I don’t have enough space allotted to me to tell you about the myriad of rulings that were suggested by the staff and a committee that was appointed. I think our esteemed editor should assign someone to write an article about how this near debacle was settled. So, Dorothy, one half of a Sobell Prize for your sportsmanship and the other half for your memory from a guy who can’t remember a hand from table one when he reaches table two.

Column of the Year. For a change I won’t give a certain column that is very dear to me the award for this year. Instead, I will give it to a writer of a column called A Poor Man’s Thirty Days in the Washington Bridge League Bulletin. He is my nephew Jerry Machlin and his middle name should be Barrabas. I can’t tell that guy a gag I intend to use because if his Bulletin comes out ahead of ours I am minus one gag. Let me tell you how underhanded he is. I once told him a funny story that I intended to use in Thirty Days; I felt safe this time because we were due to go to press three weeks before his rag was. Did this deter Jesse James? Oh, no. He called a meeting of the officials of his conference and told them he had a very important announcement to make and an extra edition should be printed at once. And the only important thing I could find in this “special extra” was my gag. Nevertheless, a Sobell Prize to Jerry — not for his column, but for the very funny gags I’ve stolen from him.

Well, that ends 1968. It was an exciting and gay year. That is, as far as bridge was concerned. Personally speaking, I hope that 1969 — the first full year of my retirement — will be as exciting as 1968. I have an interesting first four months scheduled. I’m to be a bridge lecturer and tournament director on the S.S. Oceanic, which will make six two-week cruises to the Caribbean. In fact I’m typing this in St. Thomas in the Virgin Islands. I have a half-dozen favorite tournaments scheduled including two Nationals. And on Sept. 14, Travel with Goren has asked me again to direct tournaments on a second six-week bridge cruise to the South Seas and Australia.

For a report on my first trip, and on bridge “Down Under,” I’ll see you in Sixty Days.

Forquet won the opening lead, drew trumps and lost only one trump trick and one in each minor.

But the seething ‘Rama audience saw it differently:

Pabis Ticci’s opening lead was deadly! D’Alelio ruffed the continuation of the ♣6, lead a diamond to partner’s ace and ruffed another club. Pabis Ticci had a natural trump trick for down two.

Why did Pabis Ticci elect to lead the ♣A rather than the ♦A? The man who always looks so serious but actually has a deliciously dry sense of humor explained it thus: Earlier in the event, Robinson had led the ♣A to good effect. Pabis felt what worked for Robinson might work for him!

It is not often that the same player gets the opportunity to make a doubled game on both the North-South and East-West cards of the same board. Dorothy Hayden did so when a set of Trials hands inadvertently was played in the LM Women’s Pairs at Coronado.Opening lead: ♥K. This was the first board of the session, and Dorothy was sitting South. She did not recognize the deal because, in the Trials last October, she has sat East. Then, the bidding had started in the same way but Tobias Stone, with the South hand, doubled 4♥. The defenders could win no more than two hearts and a spade.At Coronado, Dorothy won the ♥A and returned a low one. There is no defeating the contract if West ruffs, so she correctly sluffed a diamond. Declarer reyurned to her hand with a club ruff, dropping the ace, and led another heart. West ditched another diamond and dummy ruffed. The ♣K was led, East ruffed and declarer overruffed.If declarer now plays ace and another spade, West can win the king, put East in with a diamond and ruff declarer’s ♥Q for a one trick set. So Dorothy played the ♠10. West viewed the card with grave suspicion and decided to duck. That was that. The ♠A followed and one trump and two diamonds was the sum total for the defense.