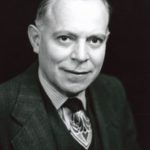 For 30 years (beginning in 1942), Al Sobel’s columns, under the headings 30 Days, 60 Days, or 360 Days, were one of the most popular features of the Bulletin. The annual Sobel masterpieces served as a summary (albeit a somewhat subjective one) of the proceeding year’s doings in the world of tournament bridge.

Well 1964 has come to an end but there was a time on December 31 when I feared I wasn’t going to see the old year out. I was on board the S.S> Independance<?em>, 400 miles out at sea and, as you may have read in your local papers or heard on TV, we were in the midst of the most violent and vicious storm taht had lashed the Atlantic in over 30 years. The waves were breaking over the captain’s bridge, eight stories above water level. It was an eerie and frightening sight to look out your window and see nothing but water. The waves were so powerful that they stove in one window, one porthole, and one gangplank door. No dancing was allowed on New Year’s Eve: enough people were injured as it was.

A few of the regulars sat at the bar as usual. It was quite an interesting experience to reach for your own drink, and find something entirely different in front of you. As soon as you’d put your drink down, it would slide with the motion of the ship. If you were fast enough you could snatch your own drink as it slid past you on its way to the other end of the bar. I now make my first New Year’s resolution. No more cruises on the North Atlantic in the winter. From now on I am strictly a Caribbean man.<?p>

Now let’s review last year, first for “firsts” and then give out the Sobell Awards for meritorious performances. We all know that our game is getting bigger and bigger every year. Membership is increasing, and tournament attendance is soaring sky-high. Sometimes I wonder, to invert a cliché, if “our bridge is not getting too big for us!”

1964. The first time we had a school teacher as president of the league, and like all teachers, he had class and principle. He was mild-mannered and mild-spoken but when he had a point to put over he used his teacher’s pointer — in the form of a gavel — to drive it across. I met him at many tournaments on the mainland and also in Hawaii and twice in Canada. He doesn’t drink but despite that fault, he and I had a lot in common. Congratulations on a fine administration Leo.

1964. The first time we didn’t appoint one or two charities for the next year. The new ACBL Charity Foundation is now in charge of this activity, and they review all applicants and dole out the dough as they see fit. Personally, I think it is much better to help a lot of organizations with a little less than give one or two recipients all the swag. I’ll have my application in by Cleveland.

1964. The first time the World Olympiad was held in this hemisphere. And this item, my friends, brings forth no snide or humorous remarks from your correspondent. I said it in my column last June and I say it again: it was the greatest bridge event held since the discovery of the game. I was chief director of the Olympiad and I know the myriad of problems connected with it. Over 100 people worked every day to put the show over and the final result was well worth it. But, I’m still glad that we won’t have the event here again for at least 12 years!

1964. The first time we had a school for tournament directors. It was open only to those who qualified. The conditions for eligibility were:

That ends the resume of the year 1964. It was an interesting year with no really startling innovations. I will now proceed with the pleasant task of presenting the Sobell Awards. I must first make my opening statement that I wish to hear no recriminations or complaints about the awards. They’re the result of a serious 30-minute study on my part, and besides, I pay for the prizes — that is, I would pay for them if there were any.

Player of the Year. I had a tough nut to crack with this award because two other players — Mrs. Dorothy Hayden and B.J. Becker — were mighty close to my recipient. My man won the Vanderbilt Cup, the Blue Ribbon Pairs and took second in the Spring Open Pairs. None other than Lew Mathe, of California. This is at least the second time he has won this award but I’m not going to check back in the records to see if he won it more often. He also received the Mott-Smith trophy for winning the most masterpoints at the Spring Nationals. The deciding factor that won the Sobell Award was that he made the above record with three different partners, which always carries much weight in my book. Congratulations, Junior. I gave Mathe this nickname in Los Angeles in 1937 at which time I predicted that he would become one of the world’s greatest bridge players. And nothing has transpired to make me retract that prediction.

Winner of the Year/em>. This award which also includes the McKenney Trophy for the most masterpoints, goes to a member of the distaff side. Mrs. Hermine Baron, also of California, garners this SObell Award and I might add, she won it “going away.” When Jacoby amassed over 1000 masterpoints during 1963 we all predicted that this record would stand for years. Boy, were we mistaken! Mrs. Baron came up with a “mere” 1,370 points, 337 more than Jake’s record of last year. Who said that women are the weaker sex! Incidentally, Mrs. Baron is only the second female to win the McKenney, Helen Sobel having been the other. Congratulations, Hermine.

Best Bet of the Year. You may think that this is a silly category to award a Sobell Prize, but I’m sure that after you hear the circumstances you will agree and vote whole-heartedly with me. This happened at Dallas during the Team Trials. After four sessions of the round robin, Solomon-Fishbein and Gowdy-Jotcham hadn’t won a match. They had each lost four straight. One of the tournament directors went up to Joe Matthews before the start of the fifth match and said, “I can’t understand two such good pairs being shut out so far.” Joe (Sure Thing) Matthews said, “They’re not playing well and deserve to lose.” The director replied, “Well, I disagree. I’ll lay you five to four that one of them wins the next match.” Quick as a flash Sure Thing grabbed him up on the wager, and two minutes later paid off! Have you caught on to the gimmick yet? By the schedule they were due to play each other the next match — one of them had to win! The director in question was the writer of 30 Days, and so I’m going to award him a Sobell Prize. I think I deserve it, don’t I? Congratulations, Al. Thank you, Al.

Screwball Hand of the Year. Here is a beaut. It has already appeared in my column but I do reuse some things to give awards.

East led the ♥K which was won by North’s ace. Declarer led the ♣8, East ducked, dummy’s king was played and declarer took all 13 tricks! The Sobell Award goes to East because after the hand was over, he didn’t shoot South who complained to his partner, “Why don’t we bid these laydown slams!”

Set of the Year. This award goes to Harry Harkavy and Cifford Russell who, during the Trials, went down 3200 points on a hand. The Award is not for taking the set but for their explanation of it. They explained it so logically that even the recipients of the set thought they had a bad board!

Book of the Year. I hate to go out on a limb and say that one book is better than the other. After all, most bridge authors are friends of mine and I have so few in that category that I don’t want to lose the other four. So I therefore give the Sobell Award to the new Bridge Encyclopedia as the best book of the year. After all it had about 800 authors, so I do ingratiate myself with all of them with this award. Nut, no kidding, it is a tremendous tome. There isn’t anything concerning bridge that you can’t find in this 700-page book. I take that back. It doesn’t give the ages of most members of the female sex. EVen 800 authors wouldn’t have the nerve to do that.

Best Gag of the Year. This is a true story and I certainly believe it rates an award. Alvin Landy, Exec. Sec., was on jury duty and his name was pulled out of the box as a prospective talesman. He took his seat in the jury box, and one of the lawyers, evidentially recognizing him, started the questioning.

Tournament of the Year. I described it a month ago and I’m not going to repeat myself. A Sobell Award to the regional tournament held in Honolulu in NOvember. Aloha, Hawaii.

Hope of the Year. I am going to break precedent and award a Sobell Prize to the winners of an event that won’t take place for three months. I mean the INternational Match for the Bermuda Bowl in South America. Maybe I can break the jinx after eight years of defeat and hex our team into winning. Six Sobell Awards to (alphabetically) B. Jay Becker, Ivan Erdos, Mrs. Dorothy Hayden, Peter Leventritt, Kelsey Petterson and Howard Schenken. ANd an extra large Sobell to Johnny Gerber.

Well, as they say on TV — this ends the year that was. For me, personally, it was a good year — healthwise and otherwise. I hope it was the same for you and if it wasn’t may next year be better.