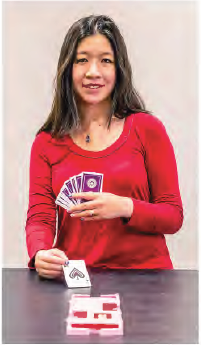 New Year’s Day 2011: Sylvia Shi earned her first masterpoints at The Bridge Club of Baltimore. “I went to the club and kibitzed for three sessions before someone finally asked me if I wanted to try playing,” she says. Their 55% game paid .50 masterpoints.

Sylvia and her partner attended the 2011 Spring North American Bridge Championships in Louisville KY – her first NABC! They played in the Educational Foundation 299er game and came in first in their strat. “I still have that trophy,” Sylvia boasts. In her first year, she earned almost 500 points to claim Mini-McKenney Rookie of the Year honors.

In 2015, Sylvia picked up wins in the Lebhar IMP Pairs and NABC+ Mixed Swiss Teams, followed by the Marsha May Sternberg Women’s BAM in 2016 and the Smith Life Master Women’s Pairs in 2017. (She added a Women’s World Team Championship gold medal to her trophy case in 2016.)

At 311/2 years old, Sylvia passed the 10,000-masterpoint mark at the San Francisco NABC, and joins the roster of Grand Life Masters as the youngest woman – and the 13th youngest among all players to achieve the ACBL’s most elite rank.

All in less than nine years.