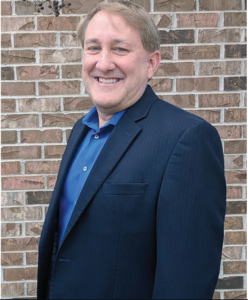 Russ Jones is a bridge booster, as his volunteer resume attests. He is a club owner and director. He organizes tournaments – he held the first-ever non-Life Master Regional many years ago and continues to host that tournament annually in conjunction with a sectional. He teaches bridge. He has coordinated GNT/NAP and special event contests. He has served on the
Unit 161 board of directors. He has served on the ACBL Board of Directors representing District 10 for five years.

Now, Jones accepts the gavel to serve in the League’s top volunteer capacity: 2019 president of the ACBL.

“My priorities as president are twofold,” says Jones, “financial responsibility and increased support of clubs/teachers. I am actively looking for ways to lower expenses at the League. Several members have made suggestions that give us a good starting point. I will be instructing the Governance Committee to investigate these alternatives and present their thoughts to the
Board in the near future.”

Jones says that on his travels as president, he will be focusing on meeting with teachers and club managers to get their input on how the League can help. “In the area of membership, I do support the marketing efforts to youth, but I feel that the major target demographic are those in their 50s to early 60s. Also, most new members are not recruited at tournaments. They are recruited at local clubs by club managers and teachers. We need to reach out to these groups and incentivize them to recruit ACBL members.”

Jones has served the BOD as chair of the Bridge Committee for the past three years and served on the Competition and Conventions Committee as the Board representative for the same period. Jones is also treasurer of the ACBL Charity Foundation and was a trustee of the ACBL Education Foundation.

Jones, who earned his doctorate in computer science and accounting from the University of Texas-Arlington, has been a professor in the Department of Accounting and Information Technology at Arkansas State University for the past 28 years – “with the exception of two years I was ‘on loan’ to a university in New Zealand.” The past three years, he has served as department chair.
Jones lives in Jonesboro AR with his wife, Jessica, and their two daughters, Riley, 7 years old, and Madison, 1. “Obviously, without the support of my family, I would be unable to fulfill the duties of this office.”

He adds, “Besides family, work, and bridge, the only other thing I do with my ‘free time’ is golf once a week.”

Jones started playing bridge when he was 7 or 8 with his family around the kitchen table.

“My first duplicate game was February 1987 with my mom. We won a masterpoint and had to join some organization called ACBL to get our points recorded. My proudest bridge achievement was winning the Flight A Pairs at the Mexican Nationals with my mom while we were still non-Life Masters.

“I would like to thank the Board for giving me this opportunity to serve the League as president in 2019. Ever since my introduction to duplicate bridge, it has been my passion, and I want to do my best to ensure that duplicate – and especially the ACBL – is strong and still in existence when my kids grow up.” 