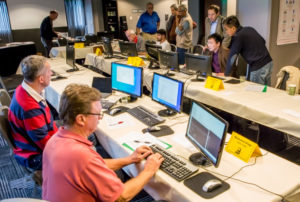 The 23rd annual World Computer-Bridge Championship started on Monday, with seven bridge-bots competing for the title. The ACBL and World Bridge Federation sponsor the event, run by organizer Al Levy. Follow the action on https://bridgebotchampionship.com/ where you will also see all past championship results, as well as interesting articles on bot play.

Each entry plays as a team of four identical bridge-bots. The round-robin phase ends on Thursday, with the top four bots advancing to the semifinal knockout stage on Friday. The final match takes place on Saturday.

The event is being held in Sierra H on the fifth floor of the Marriott. Visitors are welcome.