The Beijing Hua Yuan Cup is a women’s bridge team championship with $250,000 in prize money. My wife Pamela was invited to play on the USA team with her partner Sylvia Shi. Pamela and I arrived a few days before the tournament. The hotel was called the Nuo Hotel, and it was like a palace out of the Ming Dynasty. Our room was immaculate. It had every luxury you could think of, porcelain tea pots with charm and art, and the bathroom was four times as big as our home bathroom. But strangely there were no dressers with drawers for clothes. (It appears that they expect guests to travel light.) 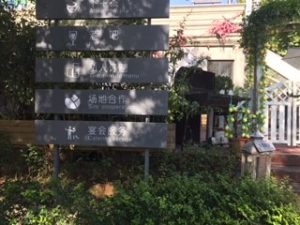 When we went for our first walk down the street, we were surprised to see all the street signs and restaurants along the way in both Chinese and English. There were many young people on the street at night and hundreds of bicycles were parked on the corners, unlocked! But we had to be careful walking, as cars and motorcyclists like to drive on the sidewalk as well!
Eight women’s teams entered the bridge tournament: two from China, and one from England, Italy, Scotland, France, Denmark, and the USA. The USA team led most of the way, and won $30,000 for first place.

Winning is great, and pays the high expenses, but the highlight of our trip was on the afternoon off when we took a bus ride to a school and sports center, to meet many of the children who are being trained in the game of bridge. Bridge is considered a sport in China. When we arrived, we went to a huge basketball court, where 30 tables of kids ranging 8 to 17 were seated in school uniforms. After being introduced, we gave speeches and autographs! Then the children from each table came up and chose a star player to bring to their table and play some bridge. Three cute girls came running up to Pamela and took her by the hand to the table. (I bided my time, but finally some boys came over for me as well.)

At my table, the bridge was not on a high level, but the kids were having a tremendous amount of … fun! “Gee,” I thought, “I forgot bridge was fun. We at the top of the game take it so seriously.” The boys were laughing with every bid and play – it was fun for me just to watch them. I met one boy, age 10, who introduced himself to me as Kenny. He spoke fluent English. He told me he learned English from his teacher when he was 5. I asked him why he took up bridge instead of playing computer games. He said, “In bridge you don’t have to look at a screen all day.” Then I asked if he would like to learn our relay system “GUS,” and showed him one of our books. He wasn’t impressed. He said, “Relay is good but tells too much to the opponents. Also natural is easier for most of the students – there’s nothing to remember.”

The girls at Pamela’s table also spoke English. They asked Pamela if we were Jewish. And do we eat special food. Pamela asked how they knew that, and they said they learned in school about all the world religions. Then water bottles were offered and Pamela made a blessing before she drank. Her new young friends all watched with deep respect.

This last incident was typical of all our experiences in Beijing: the respect and kindness of the people were amazing. Even those who didn’t know us, like the clerks in the grocery stores, were sweet, cheerful and helpful. Once the hotel maid came to our door and wanted to ask us if we needed more towels, but saw that I didn’t understand her Chinese. So she whipped out her iPhone-plus from her pocket and hit the translation app. That’s China today, high-tech with traditional good manners and hospitality.