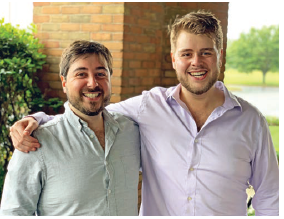 Bridge history was made at the Hunt Valley MD Regional this summer. On Aug. 15, Adam Grossack attained the rank of Grand Life Master at the remarkable age of 27; the following day, his younger brother, Zachary – age 22 years and three months – followed suit, making him the youngest Grand Life Master in ACBL annals. The record was previously held by Justin Lall, who became
a Grand at the age of 25 years and five months.

Grand Life Master, the highest masterpoint ranking in the ACBL, requires a win in an unrestricted NABC event and 10,000 masterpoints with certain color specifications.

Both are embarking on a professional bridge career. Adam, a former ACBL King of Bridge, worked for two years as a business analyst at TIAA after graduating from Brandeis University in 2014. He lives in the Boston area. After graduating from Tufts University in May, Zach moved to New York, where he looks forward to joining what he sees as the “youngest, most diverse, eclectic bridge community in the world.”

Adam was ushered into bridge by his duplicate-playing mother, Jori Grossack. Jori and Adam, in turn, welcomed Zach to the game. (Dad and oldest brother, Sam, do not play bridge. Both are attorneys.)

Zach describes his basic strategy at 9 years old: “I just bid and bid and bid … I don’t think the opponents played a game that wasn’t doubled.”

Adam remembers those early years. “Initially, he was too crazy for me and I wouldn’t play with him.”

“I could play a hand and count cards,” Zach says, “but I wasn’t playing a partnership game. I had to calm down to play with my big brother. He taught me everything he had learned.” Zach
credits his bridge education to Adam and, through involvement with the U.S. Bridge Federation Junior Program, to Michael Rosenberg.

Both are tremendously grateful to Jeff Meckstroth, as well. “He’s a great ambassador of the game,” Adam says. “He’s definitely someone I defer to. He’s been extremely supportive of us.”
The brothers’ personalities couldn’t be more different at the bridge table. Where Zach is hyper-aggressive and emotionally charged, Adam is measured and calm.

Mom Jori uses a Boston sports analogy to compare her sons. “Zach is David Ortiz – Big Papi,” she says, referencing the famed Boston Red Sox slugger. “He’s charismatic. He’ll single-handedly win the series, rounding the bases and blowing kisses to the girls. Adam is Wade Boggs, the silent assassin. He never makes a mistake. He’ll kill you, and you’ll never know what hit you.” The brothers agree that their relationship adds a layer of complexity to their bridge partnership.

Adam laughs when he’s asked what it’s like to play with Zach. “When we’re on, it’s very, very good fun – we play at a high level, and it’s awesome when we’re both locked in. There’s an added emotional stress, though, when things start to go awry.”

Zach describes himself as explosively reactive. “Adam has done an incredible job weathering my storm.”

“Zach has definitely helped my game,” says Adam. “He has especially taught me matchpoint techniques. I respect his game. We’re good friends as well as brothers.”

Zach feels it’s important to give back to the game that has enriched him. He founded a bridge club at Tufts, and was especially proud to see two of his mentees participate in the Collegiate Pairs Championship at the Las Vegas NABC.

“Bridge is an incredible game,” he says. “What’s hard about bridge is what I call the 10-hour bump – the amount of time I think you need to spend absorbing the game before you can even
say, ‘Wow, I suck at this!’ But once you stick with it, you’re stuck with it. It’s immersive, obsessive and ultimately, the best skill game in the world.”

Adam and Zach both love playing the card game barbu. “When bridge became my profession, barbu became my hobby,” Zach says. As of Sept. 1, Zach topped the 2019 online barbu ladder.

“I think it’s a huge feat for Zachary to be the youngest Grand Life Master,” Adam says. “He’s thoughtful, sensitive to other people’s emotions. He’s a good kid, a good person.”