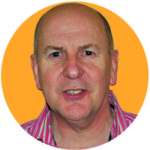 The first match of the United Kingdom’s 2018 Camrose Series was one of the most exciting on record, involving a series of deals where slams were paramount. These were the most discussed:

The common auction saw East open 1♥ and rebid 3♥, West driving to 6♥ or 6NT. That is what Ireland did in their match against the CBAI. This was what happened at the other table.

Expecting his partner to hold an eight-card suit West thought it was safe to ask for kings.

South led the ♥7 and declarer could see that at the very worst the contract would depend on the spade finesse. However, he had a number of additional chances. He won with dummy’s 10, cashed the ace of diamonds, ruffed a diamond high, drew trumps, cashed dummy’s top clubs, ruffed a diamond and played trumps, pitching three clubs and a diamond from dummy. The ♣QJ had not fallen, nor had the ♦KQ appeared, but the last trump caught South in a show up squeeze for a 13 IMP pick-up.

Everyone was talking about my second offering:

With neither side vulnerable your partner deals and passes and West opens 4♥. Your modest collection is ♠AKQJ942 ♥— ♦AKQJ10 ♣A – what do you bid?

At five of the six tables North overcalled 7♠. That went back to West who doubled. Time to check out the full deal:

East was not hard pressed to lead the jack of clubs and every declarer suffered a ruff.

It might be that Michael Byrne’s redouble was an attempt to get his partner to convert to 7NT if he happened to hold the ♥A.

At the sixth table Scotland’s Mike Ash started with 5♥ and when his partner bid 6♣ he went on to the doomed 7♠.

The advantage of starting with 5♥ is that every once in a while South will respond 6♦ when North can happily raise to 7♦. After the response of 6♣ suppose North bids 6♥? If South takes that as asking for a choice between spades and diamonds will he not bid 7♦?