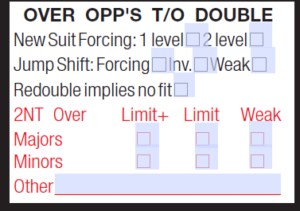 In the last issue, we examined why many pairs play that a redouble after an opponent’s takeout double shows 10 or more points and typically denies a fi t for opener’s suit. For example, when the auction begins:

You might have a hand such as:
♠K Q 7 5   ♥9   ♦A 8 6 2   ♣Q 8 7 5
The lack of a fit for partner makes the redouble attractive. Your side (probably) doesn’t have a good fit. The opponents have the same problem, but since they’re outgunned in terms of high-card
strength, you should redouble to alert partner to your intentions, namely to double the opponents, even at a low level.

2NT
Could you bid an invitational 2NT instead of redoubling? Sure, but you give up on the chance of nailing the opponents — one of the great joys of the game! Besides, 2NT has better conventional uses since it allows you to describe a difficult class of hands: those in the invitational or better range with a fit for partner’s suit.

Partner opens 1♥ and RHO doubles. What do you do? You can’t bid 2♥ since that shows 6–9 points and (typically) three-card support. What about 3♥? You could agree to play this as invitational, but many pairs prefer to define the jump raise as preemptive, i.e., a hand with four-card support in the 6–9 range. 4♥ would be wrong, too, since that shows a weak hand with five-card or longer support. So what’s left?

This is where a conventional 2NT comes in handy. Many pairs play that 2NT shows an invitational hand or better with a four-card or longer fit for partner’s suit. Partner, knowing that you have a limit raise, can judge what to do next. This treatment is commonly referred to as Jordan or Truscott.

How do you show an invitational raise of partner’s major-suit opening when you have exactly three-card support? A popular approach is to redouble, then jump to three of partner’s suit on the next round. This is why the redouble box in this section says that it “implies” no fit.

Majors, Minors
While many pairs play that 1♥ or 1♠–(Dbl)–2NT shows a limit (or limit-plus) raise, some pairs change their approach when the opening bid is one of a minor. When the auction begins 1♣ or 1♦–(Dbl)–2NT, some players like to define this as showing a weak (preemptive) raise. How do they show an invitational hand with a fit (five or more cards)? They bid three of partner’s suit. Since this approach is the opposite of what they do over a major-suit opening, it is commonly called “flip-flop.”

ALERT: Note that all of these treatments are in RED and are Alertable. Explain these agreements upon request.