As we continue to discuss the section of the convention card devoted to doubles, we recall that many low-level doubles are commonly played as something other than penalty. This is because the opportunities to inflict a large penalty on the opponents at a low level are rare. Therefore, more practical uses for the double have been developed. 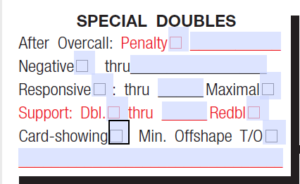 Support: In competitive auctions, support doubles and redoubles are used to tell responder that you (as a 1♣ or 1♦ opener) have three-card support for responder’s major. For example:

In this auction, you could show three-card spade support by doubling with a hand such as:
♠K 8 5   ♥A 7   ♦J 5 2   ♣K Q 9 8 6
Why do this? It allows you to differentiate between three-card support (double) and four-card support (2♠). This can be valuable information for partner in deciding how high to compete, whether to bid a game or even what denomination to bid. Change your hand slightly to
♠K 8 6 5   ♥A 7   ♦J 5 2   ♣K Q 9 8,
and you would rebid 2 to indicate four-card spade support. Indicate how high the support double agreement is in effect on the “thru” line (2♥ is popular).

Redouble: The support redouble occurs on this type of auction:

Playing this method, a redouble would show three spades while a raise (2♠) would promise four. If you play this method, check the appropriate boxes, decide how high the agreement applies and be sure to Alert the opponents.
Items in RED on the convention card must be Alerted and explained to the opponents upon request.

Card-showing: If your low-level competitive doubles show values without being strictly penalty or negative in nature, check this box. For example, if partner opens 1♣, RHO bids 1♥ and you double simply to show a good hand regardless of the pattern, this would be a card-showing double.

Minimum Offshape Takeout: A takeout double of an opening bid usually shows a hand with opening values and shortness in the opener’s suit. It also suggests support for the unbid suits. Some players, however, will make a takeout double on any hand with minimal opening values (the 12 to 14 HCP range) even if the pattern isn’t classic. If, after RHO’s 1♥ opening, you would double with a hand such as:
♠A 5   ♥K 8 7 3   ♦K J 6 4   ♣Q 8 5
check the box.

TIP: Experienced players consider this type of double to be poor. Partner will have a difﬁcult time trying to ﬁgure out your pattern if you double with a hand such as this.