Putting it all together

Some general guidelines about the use of the convention card are presented here, along with an example of a properly filled-out card. (Yours may be different, of course!) 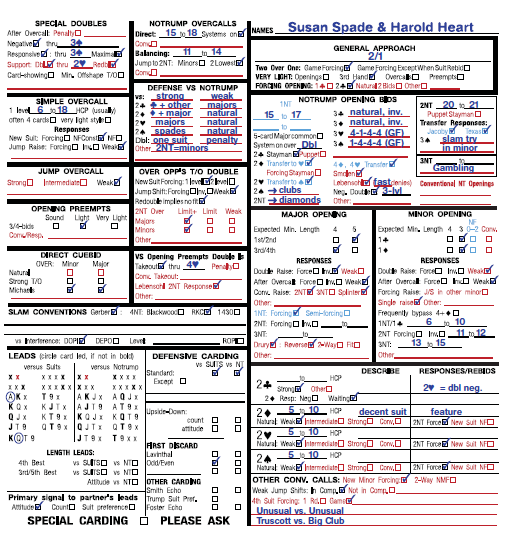 The purpose of the convention card

Although the convention card is a great way for you andyour partner to discuss your methods and refresh yourmemories as to what your agreements are if you haven’tplayed together in awhile, remember that the convention card exists for the convenience of your opponents. The opponents may wish to look at your card at the beginning of a round to get a general idea of what your methods are, they might want to see what your opening lead agreements are when they declare or they may wish to look at your card during the auction to see what your agreements are without asking you to explain them verbally.

Where should the convention card be placed during play?
Since the card is for the benefit of the opponents, it should remain in a place that they can easily access it, i.e., on the table. When bidding boxes are in use, it can be difficult to find enough room for the boxes, the convention cards, score slips, boards and snacks/drinks. Some players find it helpful to fold their convention cards in half to help conserve space, while others keep non-essential items (food) off of the table. Whatever your approach, avoid practices such as sitting on the card. Make it easy for your opponents to pick up and read your card.

Both players must have identically filled-out convention cards. It is not permitted for one partner to make calls that mean one thing while the same call from his or her partner means something else.

Looking at your own convention card during the auction or play

The Laws forbid access to written memory aids during any phase of the game, and this includes your own convention card. Your convention cards are for the opponents’ use, not yours. Note that clubs may relax this rule, however, especially if new players are participating, to assist them in learning. Experienced players may wish to overlook a newcomer’s dependence on the card. All players should be aware, however, that the card is not a memory crutch. Newcomers may be given a pass, but others should refrain from peeking at the card during the bidding or play.