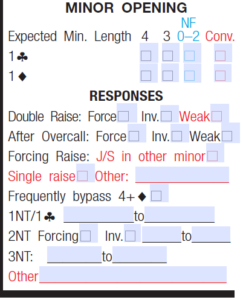 Forcing Raise: It’s surprising how many pairs don’t use some sort of conventional forcing raise after a 1♣ or 1♦ opening. The ability to show an invitational or better hand in response to a minor-suit opening, however, is important. For example, after a 1♣ opening by partner, what would you bid holding:
♠ 9 7   ♥ A K   ♦ Q 8 6 2   ♣ A J 7 3 2?
True, you could shoot out 3NT, but you’d feel silly if the opponents ran off the ﬁrst umpteen spade tricks. 1♦ is another possibility, but it doesn’t seem quite right, does it? If 3♣ is forcing in your partnership you could use that, but many pairs prefer the double jump to show a weak hand because preemptive raises occur with greater frequency than the strong variety.

J/S in other minor

One way that you and your partner could decide to show an invitational or better hand after a 1♣ or 1♦ opening is to use a jump shift (J/S) in the other minor. These auctions (1♣–2♦ or 1♦–3♣) are rarely used in a natural sense anyway, so you can use them to show hands with a ﬁt for partner’s minor, no four-card major and invitational or better strength.

Single raise
Other partnerships like to use the single raise, 1♣–2♣ or 1♦–2♦, to show an invitational or better hand, no four-card major and a ﬁ t for partner’s minor. This treatment is frequently referred to as “inverted minors.” Like the jump shift in the other minor, these bids are forcing for at least one round and (depending on your agreements) possibly forcing to game.

ALERT Note that if you decide to play either of the above methods, you should discuss what continuations mean. You must also Alert the opponents.

Frequently bypass four or more diamonds: It’s a bridge fact that major suits outscore minor suits, so many pairs, in response to a 1♣ opening, will respond by bidding a four-card major suit instead of a four-card (or longer) diamond suit. For example, if partner opens 1♣, what do you respond holding:
♠ Q 9 8 4   ♥ 10 2   ♦ A 6 5 4 3   ♣ Q 7?
If your style is to ignore the diamonds and bid 1♠ instead, that’s ﬁne. This is a popular approach, but if you play this way, check the box so that the opponents know about your style, too. This is not, however, an Alertable treatment.
If you prefer to respond 1♦ instead, leave the box blank.

1NT/1♣: How many high-card points are you promising when you respond 1NT to a 1♣ opening? Write your range in the spaces provided.
2NT: After a 1♣ or 1♦ opening, what does 2NT show? It typically denies a four-card major, but the range may vary. If it’s game forcing, check the appropriate box. If it’s invitational nstead, check the other box and write in the point-count range in the spaces provided.
3NT: Write in the appropriate range.
ALERT Other: Any other conventional treatments should be listed here and Alerted if used.