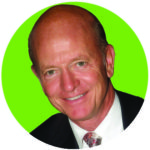 West leads the ♣A. How should third hand (East) signal? Last time, we looked at third hand (the partner of the opening leader) playing the lower of touching honors when he might win the trick. For example:

Third hand plays the jack or the jack! But what happens when third hand cannot win the trick, because someone has already played a higher card than his best?

Then third hand does the opposite and plays the top of his touching cards. In the above example, third hand must play the ♣Q. This shows the queen and the jack. (In another deal, it might be a singleton queen, but I do not remember the last time I saw that.)

Why is this so important? Look at the full deal:

The only way to defeat 4♠ is for West to lead a low club at trick two, putting East on lead for the lethal shift to the ♥Q. The defenders take two clubs and two hearts. On any other defense, South has 10 winners: six spades and four diamonds.

Note that it cannot cost East to play the ♣Q at trick one. If alternatively he plays the ♣2, West will think that is discouraging. He will never find the low-club continuation. (Yes, this assumes West hasn’t led the unsupported ♣A. If East finds that West has done that, East should get a new partner before the next trick!)

Here is another example:

When you discard, you cannot win the trick. So the same rule applies: Signal with the top of touching honors. Here, East should discard the ♣K.

Note that all of the honors are equally powerful. Do not be shy – get that king onto the table.

This will steer partner in the right direction when this proves to be the full deal:

The danger is that West will play a third diamond, hoping East can overruff the dummy. To deflect West toward the winning play, East must discard that ♣K. Now it should not be beyond West to continue with the ace and another club, giving the defenders the first four tricks.

Notice finally that if West does start with three rounds of diamonds, declarer makes the contract. He ruffs the third diamond with dummy’s ♠7, draws trumps and runs the hearts. He ends up with an overtrick.