Deductions from the Defender’s Plays – Part 2

As anyone with some real experience in life knows, it has to be honestly and sadly admitted that if something seems too good to be true, it usually isn’t true. In the same way, if competent defenders allow you the opportunity to do something you wanted to do but couldn’t, it is seldom safe to assume that they have your best interests at heart.

Let’s say you are playing a notrump contract and you have no certain entry to dummy:

You lead the king and someone takes the ace. You can assume without further testing that the suit is not breaking 3-3 — if it were, the defenders would hold up the ace to deny you access tothe long card.

If only all your problems were as easy as that, you may say. Well, the fact is that even the more advanced examples of deduction seldom demand a very complicated form of reasoning. For instance:

West leads a heart against your 3NT contract and East wins with the ace. East returns the ♥9 and your jack loses to West’s queen. West sticks to his guns by leading another heart and East Discards a spade on it.

Your first move is to cash the ♦A — hoping vainly that the queen might be singleton — but when both defenders follow small, you next lead the ♣K. East wins with the ace and returns a spade. You lead a second club but West shows out and you are obliged to win the trick with dummy’s queen.

The club situation is very disappointing, to be sure, and your only alternative now is to bring in five tricks in diamonds. With no clue to the location of the queen, it would normally be correct to take a finesse, but before doing so you naturally ask yourself if you can deduce anything from your opponents’ maneuvers to this point.

It should occur to you that East, in taking the ♣A when you led the king, has been delightfully cooperative. If he hadn’t taken it, you could have tried nine ways from Sunday to get to dummy for the diamond finesse, but you never would have succeeded.

You eye East narrowly and decide that he bears no resemblance whatsoever to Santa Claus. The more you think about it, the more you become convinced that the reason East grabbed the ♣A immediately was because he wanted to give you an opportunity to take a finesse in diamonds, knowing it would do your cause no good.

Accordingly, you should bang down the ♦K. Your best chance, by far, is to play West to have started life with the doubleton queen.

The maneuvers of your opponents can be equally revealing when they themselves have entry problems. The heart situation in the following deal is one that frequently gives rise to useful deductions.

You are at 3NT, the ♥6 is led, and East takes the ace. East returns the ♥10, which West wins with the king, and West plays a third heart, East following with the deuce.

It certainly seems likely that West has led from a five-card suit and that East no longer has any hearts. Accordingly, a very obvious question arises: why didn’t West make the normal play of ducking the second round of hearts in order to maintain communication with his partner? The answer must surely be that West has, or thinks he has a certain entry, which can only be the ♦K.

This deduction is so reliable that, instead of attacking diamonds in an attempt to make your contract, you should aim to develop the necessary tricks in the black suits, even though this means taking a spade finesse and also relying on a 3-3 break in either spades or clubs.

To catch on to this type of deduction you have to keep asking yourself why the defenders have played the way they have. In the present case, you might say that West’s failure to duck the second heart is curious even if he does have the ♦K. Nevertheless, the fact remains that West’s method of play makes far more sense if he thinks he has an entry card than if he hasn’t. Indeed, on some possible layouts it could be highly necessary for West to defend in this fashion, for he might envision being thrown in with a heart later and forced to lead away from his ♦K.

Many clues can be gained from the way the defenders wriggle when threatened with an endplay. The following situation occurs quite frequently in one guise or another. 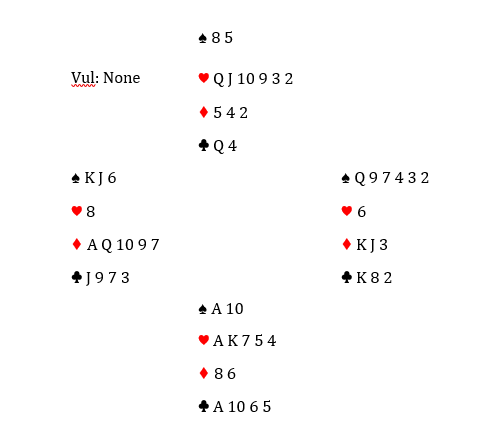 You’re the declarer at 4♥— a contract that the opponents can defeat if they attack spades soon enough. However, it isn’t too easy for West to judge this, and we’ll assume he lays down the ♦A and then leads a diamond to partner’s king.

East, for his part, is on the ball and shifts to a spade right speedily. Your only chance now is to force the opponents to open up clubs in the hope that you can avoid losing a trick in that suit. So you win the spade and lead a trump to the queen as both opponents follow. Then you ruff dummy’s remaining diamond and exit with the ♠10. West wins this with the jack and is obliged to return a club, for if he plays anything else you can apply the closure by ruffing in your own hand and discarding a club from dummy.

Acutually, if you think about it you can hardly go wrong. East is clearly marked with the ♣K, for otherwise he would have overtaken his ♠J and returned a club. Therefore, the proper play is to insert dummy’s four-spot on the club lead, and since West has the jack, the hand is brought to a happy conclusion.

Competent defenders are usually very much in favor of promoting trump tricks for themselves whenever possible and you can draw many deductions from their attempts to do so. 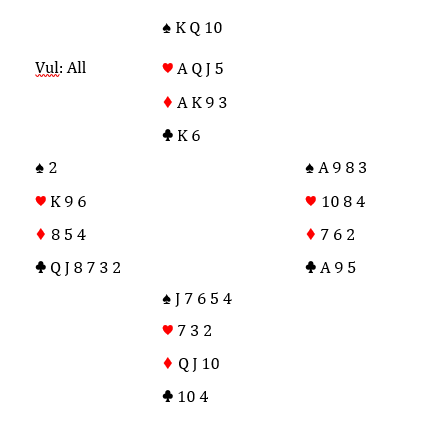 You are at 4♠ and West leads the ♣Q, the king losing to the ace. The ♣9 is returned, and after winning with the jack, West shifts to a diamond, taken in dummy. The king of trumps loses to the ace abd East, with malice aforethought, leads a third round of clubs. How does that grab you?

Your first reaction may be that the lead of the third club is a friendly act. It enables you to discard a heart from your hand and ruff the trick in dummy, and later, after drawing trumps, you will be able to discard another heart on the fourth diamond. In that way avoiding the physical and mental strain of taking the heart finesse.

However, being a careful as well as suspicious player, you naturally meditate somewhat before actually putting this plan into effect. Why, you ask yourself, has East deliberately concealed a ruff and discard by leading a third club?

To appreciate the answer, take a look at East’s hand. He, the scurvy fellow, has realized that if he can persuade you to ruff a club on the table, he will get a second trump trick and the contract will go kerplunk.

Accordingly, you indignantly reject his Greek gift and ruff the third club in your own hand. Then you draw trumps, returning to your hand with a diamond, and take the heart finesse for your contract. As a matter of fact, you can be practically certain that the ♥K is where you want it to be, for if East held it he would not have played as he did.

Finally, a case where you base your calculations on the good old dog-that-didn’t-bark-in-the-night principle.

West’s ♦Q holds, and he continues with a second diamond to his partner’s king. East broods a little and shifts to a trump, which you win with the ace. Who do you think has the missing queen?

It is clear that West is out of diamonds, and therefore East could normally have been expected to continue a third round of the suit if he thought West might have a trump worth promoting. There can be only one reason for East’s failure to do so: he surely has the queen of trumps and has realized that playing a third diamond would give the game away when West failed to ruff higher than dummy.