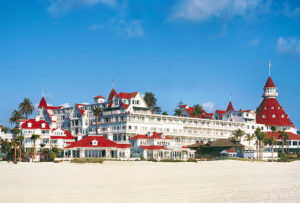 Three miles from the Hyatt is a historic site that has particular meaning for some longtime bridge players – particularly those who have been playing more than 45 years.

The Hotel Del Coronado served as the site of the annual Pacific Southwest Regional for 26 years beginning in 1946. The biggest tournament held there during that time was the 1959 Fall NABC. After the local regional moved to the Town and Country in 1972, there was a nostalgic one-time return to Coronado in 1985.

The hotel is famous for its colorful history of movie appearances and celebrity guests over the past 130 years. Without having any experience in the hotel business, Elisha Babcock and Hampton Story Jr. bought Coronado Island in 1886 with a goal of building a magnificent hotel, one that would be “the talk of the western world.” They financed construction by auctioning off lots on the island, raising $1.5 million in seven months.

When the hotel opened in February 1888 as one of the largest buildings in the country with electricity, the room rate was $2.50 a day ($69 in 2017 dollars) and included three meals. It also boasted telephone service and even a sprinkler system. The first outdoor Christmas tree with electric lighting was displayed there in 1904.

The hotel became a destination for celebrities from the beginning, hosting stage actress Lillie Langtry in its first months. Author L. Frank Baum frequently stayed there for months at a time between 1904 and 1910, while writing three books in the Oz series. Sixteen presidents have visited, beginning with Benjamin Harrison in 1891 and including every president from Eisenhower through Obama; Nixon held a state dinner there in 1970. Liberace was discovered playing piano in the hotel bar in 1950.

The hotel became a popular place to make movies during the silent film era, beginning with “Maiden and Men” in 1912. In order to encourage filmmaking on site, longtime owner John Spreckels gave a $1 yearly lease on prime land nearby to a studio in 1915. Though the studio didn’t last long – the company went out of business two years later – the trend of making movies at the hotel did.

The most famous movie filmed there was 1959’s “Some Like It Hot” starring Marilyn Monroe, Tony Curtis and Jack Lemmon. The American Film Institute named it the No. 1 comedy of all time. It was just months after the film’s release when the Fall NABC came to Coronado.

A fake tower was constructed on the hotel’s roof in 1977 for “The Stunt Man,” starring Peter O’Toole and Barbara Hershey, and famously destroyed in a movie explosion. Also in 1977, the hotel became a National Historic Landmark.

Famous guests at the Del include: Desi Arnaz