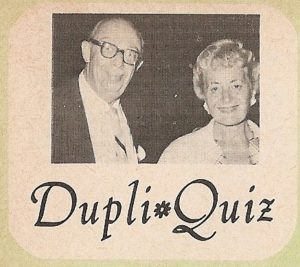 November 1967
Bulletin Editor Dick Frey is well known as a bridge writer and editor that his accomplishments as a player tend to be overlooked. He was an original member of the Bid-Rite and Four Aces teams and has won mst of the major national titles. After retiring from tournament play from 1937-1941, he made a come back in 1942 and won both the Spingold and the Vanderbilt. For more than 20 years, he had the highest ratio of tournament victories per event entered. He is the author of many books on bridge and other card games and was for many years a highly successful freelance magazine writer on non-fiction subjects.

His wife, Mabel, an accomplished player in her own right who won the Women’s Pairs at the Eastern Regionals in consecutive years, and the New England Team Championship, is a familiar figure at National and International tournaments. Her efficiency as a recorder plays a large part in the production of the World Championship Books.

The Freys play Standard American. As all the members of the Bulletin staff wish to retain their jobs, we have refrained from editorial comments on the answers*. We can only add that we all love Mabel.

*Since my staff is chicken, let me reply to one obvious question before it is raised: While I do not always agree with my wife’s bidding. I do understand it. RLF

What do you bid as South on each of the following hands?