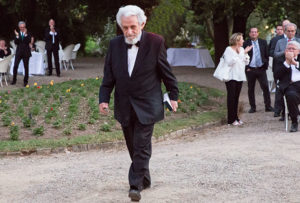 Benito Garozzo, also known as “the living legend,” is one of the most famous and loved bridge champions in the world. He is attending the San Diego NABC. I interviewed the star of the Italian Blue Team, who turned 90 this year.

How did you start playing bridge?
I was born in Naples, but my family was living in Cairo, Egypt.

Then, one summer I was sent to spend the holidays in Italy. Ten days after my arrival, the Second World War broke out. Ships were not traveling to Africa anymore, so I was stuck in Italy, where I stayed with my sister and brother-in-law. We did not know how to play bridge, till one day an uncle came with a book of Ely Culbertson dated 1935. My sister was the only English speaker among us and she translated the rules for us. Soon bridge became the only hobby of the house!

After the war, I went back to Egypt and started playing at the local bridge club, where I met great players. I improved my cardplay using Autobridge, and ended up in the news for the first time: An Egyptian newspaper described me as a promising talent.

How did you become a member of the Italian Blue Team?
The Blue Team had already won three world titles when, in 1961, I was suddenly called, just 10 days before the start of the championship. Pietro Forquet’s partner had an unexpected work commitment. I replied with this telegram: “Thank you for the desired invitation and I confirm my enthusiastic participation. Stop. Best wishes. Stop.”

When, a few months ago my partner and I were called on for the Italian National Team for the 2017 World Championships, we sent the Italian Bridge Federation these same exact words, 56 years later. The only difference is that this time it was by email!

In 1961, I was to play with Pietro Forquet. I almost did not know him and we had never played together before.

We had only 10 days to build up a partnership, so each afternoon we met at Forquet’s place with Eugenio Chiaradia, who helped us to train. We used to remove the 2s, 3s and 4s from the deck, deal the cards and bid. I had always used a natural system, so I had to learn the Neapolitan Club in few days starting from zero. Anyway we were a complementary partnership: I was very aggressive, while Pietro was extremely solid and never taking risks. We were awarded as the best partnership of the championship and we won the Bermuda Bowl.

Just like 56 years ago, the invitation to play on the 2017 Open team came at the very last minute. I took a photo with Giovanni Donati, the youngest player on the team, aged 19. I put in his hands the Bermuda Bowl that I had won in 1961 and told him: “This is your first world championship and I wish that you can win it, like it has happened to me!”

Unfortunately we did not win and I know it was mainly because of my partner and me.

I am very happy that I had this opportunity. I think nobody will hit the record of playing in an Open event for the national team at 90 years old!

You have invented many bidding systems …
Thanks to computers, everybody improved in card play. Nowadays, results are achieved during bidding, especially in competition.

The bidding system gives a 5-10 percent average advantage, which seems not much, but if you think that we have lost world championships by 2 or 3 IMPs, you can see how big a difference bidding methods can make.

At the beginning of my career, I only played natural. When they taught me the Neapolitan Club, I became very much interested in bidding systems. Together with Giorgio Belladonna I invented the New Roman Club and the the Lancia Club. The Dutch Bridge Federation hired me to give lessons to their Open and Women’s teams, so I invented a specific system for them: the Volmac.

Soon after, I invented the system that I am still playing. I created it for my beloved Lea Dupont, who had come to Italy to improve her bridge and had found an Italian partner. They did not know the Strong Club, so I decided to build up a good system on natural bases for them and I invented GAR. [Ed: the system takes its name from the first letters of Benito’s last name.]

At the top of my career, a Chinese player contacted me and hired me to play Precision. He has asked me if I was up to developing Super Precision, and so I did. Now I have another system in mind, a kind of “half-strong Club,” which will be disclosed in my new book, together with many other conventions that can be included in any bidding system. The book will also include a part on leads: many hands will be presented to the best players in the world and they will explain how they would lead and why.

You have had many bridge partners in your life.
Yes, and I want to say that my successes are especially due to the fact that I have always played with very strong players: Forquet, Belladonna, Arturo Franco, Lorenzo Lauria, Dano De Falco, Vito Pittalà and many others.

The new generation of bridge players is extremely talented. The future of bridge is guaranteed. Among the young ones, I am very impressed by Agustin Madala.
As for me, I will keep playing for all my life, but when I realize that my level is not satisfying anymore, I will stop playing in public. I will retire and play only online, probably hiding behind a pseudonym.

Facts about Benito Garozzo
 He was born on Sept. 5, 1927 in Naples.
 He was married to Lea Dupont from the U.S.
 He lived in Florida from 1987 to 2012, becoming a U.S. citizen in 1994.
 He has a daughter, Silvana, a son, Fulvio, and two grown grandchildren. He is looking forward to his next achievement: becoming a great-grandfather!
 In 1964, he opened a jewelry store in Rome, next to the famous Trevi’s fountain. Called Monna Lisa, it is now managed by his daughter and son.
 He is a passionate golfer.
 In 2011, aged 84, he was proudly able to bid in 10 different bidding systems.
 In his career he won 10 Bermuda Bowls, three World Bridge Games (past Bridge Olympiads), five European Championships, two European Open Championships, four NABC titles, a Gemini Cup, dozens of Italian titles and countless national and international events.
 In 2017 he was elected to the European Bridge League Hall of Fame.
 In 2017 he was named Personality of the Year by the International Bridge Press Association.
 He has written 11 books and is currently working on the 12th.
 He has trained the Dutch and Italian national teams.