A San Francisco screening of John McAllister’s film, “Double Dummy,” started out as an effort to interest more young people in the game. But it wound up as more of a celebration of the local bridge community – and particularly the students and teachers of the Center for Bridge Education (CBE), the Bay Area organization that seeks to bring new players into the game. 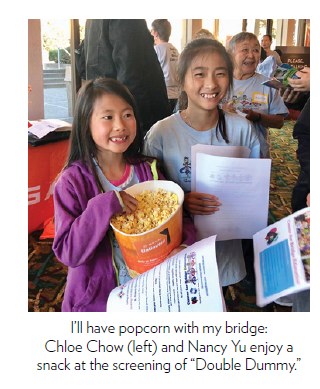 Several dozen bridge aficionados of all ages and skill levels – and even a few interested non-players – came to the late afternoon/early evening screening at a theater near the Stonestown
shopping center on the west side of town. The Sunset Bridge Club, which holds its games nearby and is run by Unit 506 President Tom Stillman, sponsored the event, which was also heavily promoted by CBE members. Organizers reported that more than 150 tickets were sold, many of them to an anonymous benefactor who subsidized their distribution to young players and their families.

The film chronicles the experiences of the USA1 team (three partnerships and one non-playing captain) at the World Youth Championships in Taicang, China, in 2012, while also focusing on the personal stories of team members and their families and mentors. Several members of Unit 506 who attended the screening remembered one of the team members, Adam Kaplan, from when he lived (briefly) in San Francisco and played at the Quicktricks bridge club in the Castro.

Afterwards, several members of the CBE talked about their own experiences. Nancy Yu, 10, said she competes in an array of events, including unit games, online games, and the Youth North American Bridge Championships – which is all the more remarkable because her parents don’t play bridge. She said she enjoys the partnership aspects of bridge, especially the communication through bidding and signals. “It’s like bridge is its own language,” she said.

As for the film, she said, “I liked the way they worked as a team, and not just a partnership.” 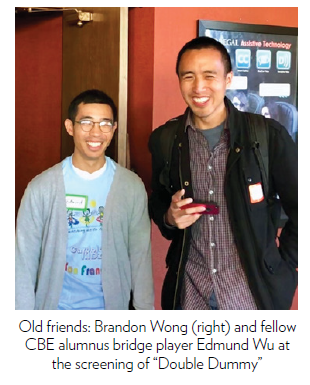 Brandon Wong, 25, a former CBE student who now occasionally teaches, said the film was “eye-opening” in its depiction of bridge as more than just a game. “It has so much potential for connection beyond the table. It really is a great way to meet people from all walks of life.”

Wong said he has made some good friends through the game. Some non-players who joined Brandon and several other players at dinner after the screening said they better understood the attraction of bridge, he said. “Now that I’m older, I really appreciate that aspect of it.”

Deborah Drysdale, who is on the CBE board, enjoyed hearing about other organizations that help nurture young players – and the contributions they make to the greater community. “Our kids, our community” was a refrain she picked up from the film.

In supporting the event, “we wanted to gather the bridge community, young and old, new and seasoned, to watch a movie about young people playing bridge,” she said. “We hoped folks would encourage their friends, whatever age, to play, countering the impression that bridge is mostly for old people. Bottom line is that playing bridge is like playing ‘war’ with a partner, and a lot more fun and exciting than playing video games.”