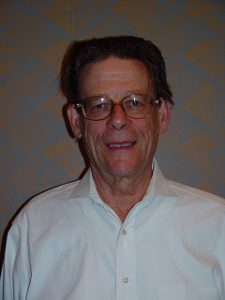 Over the nearly 50 years that I knew Hugh Ross, I always found it amusing that his email address included “huge loss,” but – speaking for all his friends – nothing now seems more appropriate.
Hugh Ross was not only a world-class bridge play, but a great friend and an incredible human being. And all who knew him cherished his sense of humor.

“Hugh’s gentle manner belied a powerful intellect and a fierce will to win,” Bramley said. “But what I will miss most about him was his keen sense of humor; he could find absurdity in any situation, and he never hesitated to point it out, even when the joke was on him. He was one of a kind.”

Bramley went on to say, “Hugh and I first bonded when he was captain of my Bermuda Bowl team in Yokohama, Japan, in 1991. In 1992, we started a regular partnership that lasted several years. That same year, my wife Judy and I started a Thanksgiving tradition of dinner with Hugh and his wife Min, along with Darwin and Kay Afdahl. The Thanksgiving tradition outlasted our partnership by a wide margin, and was a highlight of every fall national. His passing is especially poignant coming so near to Thanksgiving.”

Min Ross said the occasion of Thanksgiving normally brought out a humorous story. “When Hugh was 19, he won a 21-pound turkey at a local Montreal bridge tournament, partnering with reputedly the worst player at the club.”

Kay Afdahl, Hugh’s longtime friend, offers this remembrance: “I’ve known Hugh since we were at Cal Berkeley – long before Min was a gleam in his eye. When she did catch his eye, he never had eyes for anyone else but his ‘Dahlink.’

“Hugh always had a unique sense of humor, so dry it crackled. He had a knack for seeing through the most complicated situations and extracting only the barest facts to reach his conclusions. To this day, I can hear him say, ‘Nonsense!’ after listening to everyone chattering on about nothing and everything. Then he would pounce on the solution, which to his mind was ever so obvious.

Hugh did not see things in shades of grey. Perhaps that was why he had no patience with complicated bidding systems. He had no trouble speaking clearly and being understood by many different partners using only the 17 words in the language of bridge.”

Bob Spotts, a close friend and partner, said, “Hugh was simply an amazing bridge player.”
Spotts added that Hugh played the opponents as part of the game. “He was as good a reader of opponents as there was, and didn’t miss many of their clues. We played together early in our bridge lives, when Hugh was not yet appreciated, and I certainly benefitted. I introduced him to Min, and was rewarded by being best man at their wedding.”

“As for his bridge, he was one of the few who could march to a slightly different beat than others and do very well with it.

“Perhaps the measure of Hugh is that you will never find anyone who says something like, ‘Hugh was great, except for the fact that he … Finish the sentence any way you like.”

Along with Barbara and Gerry Fox and Joe and Shirley Nedham, my wife Suzie and I were part of a gourmet dinner group that met regularly for 42 years at Min and Hugh’s home in Oakland.”

Gerry Fox said, “When I think of Hugh, three things come quickly to mind: first, his gentle and considerate nature, second, his remarkable intellect, and, third, his ability to find humor in obscure places. When Hugh spoke, everyone listened; when Hugh laughed, everyone wanted to know why.

“After his first stroke, he had a serious problem with numbers and was told that he would no longer be able to play bridge. About a month later, we tested him at the table. I had prepared four relatively easy hands, all of which would have him as the declarer. On the very first one, he bid correctly to 3NT. The play problem was a simple holdup, which he executed perfectly. He was on his way to nine tricks, when he took an unlikely detour and managed to go down. He immediately started to laugh and said, ‘That’s the problem with matchpoints; I was trying for an overtrick.’”

Shirley Nedham said several things came to mind: “The thoughtful friend who set aside his beloved cigar whenever I, an asthmatic, was kibitzing him, even in tense final sessions at nationals; the talented friend who played the piano so beautifully; the bridge board-a-match teammate – never criticizing, only encouraging Joe and me when he and Min played with us several New Year’s eves at Reno regionals.”