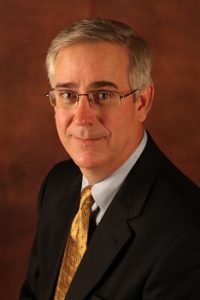 After an extensive six-month search process, Joe Jones has been named the Executive Director of the ACBL.

“We are pleased Joe has accepted this challenge,” says ACBL President Jay Whipple. “He has demonstrated his willingness to do whatever the ACBL needs done over the past months. What the Board sees clearly is that Joe cares tremendously about the organization. He’s a solid leader.” Jones, ACBL’s Chief Financial Officer, was asked by the Board of Directors to fill in as the acting executive director in May.

“I feel fortunate to be part of a community of people who find excitement and joy in being with each other and competing at the bridge table,” Jones says. “I look forward to working with the Board of Directors and staff to bring more people to the game.”

As a self-described “finance guy,” Jones puts ACBL’s fiscal health high on his priority list. “It’s important that we align expenditures and revenue to safeguard the future of the organization.”

“The Board has a relationship with Joe,” Paul says, “and we appreciate his openness. We respect his background and experience with the ACBL.”

Cuneo says the Search Committee performed a detailed rating process on the 21 resumes received – 12 of which came in response to notifications which appeared in ACBL publications and 9 of which were submitted when the position was posted on websites such as LinkedIn and ExecuNet.

The committee then invited six of the candidates for a video interview of 45 minutes to 1.5 hours in duration. For guidance in their candidate evaluation and structured interview process, the committee retained EASI Consultants.

Cuneo expressed his gratitude to the Search Committee for their hard work.

Cuneo says that one of the first things the committee addressed was the change in title from CEO to executive director. “It’s not a change of duties or salary,” Cuneo says, “but perception. We feel that executive director more closely aligns with the partnership dynamic the Board envisions.”

Jones has worked at the ACBL for eight years. He is a lifelong resident of Memphis TN. He attended Christian Brothers University in Memphis where he obtained a bachelor’s degree in business administration and he is a licensed Certified Public Accountant. He and his wife Julie – who is a neonatal ICU nurse – have a son and two daughters.