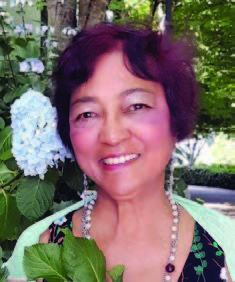 Everyone has a bridge story. Some are quite spectacular, describing the rise to bridge greatness. Shameine Ali’s story is a simple one which has brought much joy to her life.

It all started in England, in 1974, while Shameine was doing post-graduate studies. Gathered around the kitchen table in her flat, she was taught bridge by three friends – one from India, one from Sri Lanka and one from Hong Kong. The bug had bitten. Later, in Trinidad and Tobago, she found a few friends who played rubber bridge, mostly on weekend nights, as they all had day jobs. Then she discovered the bridge club in Port of Spain, which had 12 to 16 tables of duplicate bridge every Monday evening, and it was very social.

During the early 1980s, Shameine introduced her coworkers from a French company to the club. One of her partners was Monique Donck, from Paris. Shameine has maintained a close friendship with Monique.

In 1989, Shameine, with her two sons, immigrated to Vancouver BC. She had to abandon any thoughts of bridge for the next 25 years due to a demanding job plus being a single parent.

That summer, she traveled to Paris and visited Monique, who invited her to a game at her club. Shameine resisted, as she had not played for so long, but Monique insisted. After some coaching, they played and scored average. Monique made Shameine promise that when she returned to Vancouver, she would find a club and start playing.

“So in September 2015, as instructed, I visited the Vancouver Bridge Centre, introduced myself to Bruce McIntyre, the director, who guided me to a table to kibitz,” recalls Shameine. “That was the start of my Canadian bridge adventure. People were kind and accommodating. I quickly learned 2/1 and different conventions.”

In December that year, she joined the ACBL and earned about 5 masterpoints. She learned about regional and national tournaments and realized that it would be a wonderful way to travel and enjoy her new hobby.

In 2016, Shameine attended her first regional in Penticton, followed by the Summer NABC in Washington DC, the Lynnwood Regional, the Fall NABC in Orlando, and ended the year with the Whistler and Palm Springs regionals. She did not have any arranged partners, but always sought out the partnership desks and met new people, many of whom became friends.

Late in 2016, she discovered the Mini-McKenney masterpoint races and saw that she was near the top in her category. She ended up in second place ACBL-wide and first in Canada.

Imagine Shameine’s excitement when, during the 2018 Fall NABC in Hawaii, she needed just 0.66 masterpoints to become a Life Master. After a game in which she was sure she would go over, she found she had earned only 0.65 points, giving her 499.99. So close! The next day, she earned her final .01 and invited friends to a party to celebrate.

Bronze Life Master came the following year in Palm Springs with another celebratory dinner with friends from San Diego. She then set her sights on Silver LM for 2020.

The year started nicely with regionals in Monterey CA and Vancouver WA. Then, COVID hit and tournament after tournament was canceled. Shameine was worried she would not achieve her goal. However, as opportunities to play online increased, it became easier to win the required points.

On Sept. 13, 2020, Shameine became a Silver Life Master after joining the ACBL less than five years previously. She is proud of the last game at the Vancouver Bridge Centre with partner Monica Angus in which they scored 69%. The party with friends is postponed to a future date when it is safe.

“Bridge has been a life-changing experience,” said Shameine, “It has brought me so many friends and such joy in my retirement. I can see myself playing until my last day on this earth.”