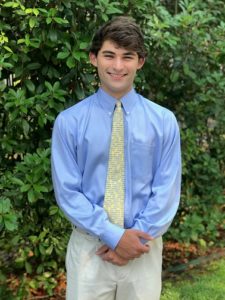 Over the course of eight short years, Reese Koppel has gone from knowing nothing about bridge to being one of its fiercest advocates.

“Bridge can be here to stay if we help my generation appreciate its essence, and it is my goal to do everything I can to ensure this happens,” he says.

This enthusiasm for the game prompted the ACBL Educational Foundation’s selection of Koppel as 2018 King of Bridge.

According to Barbara Heller, Educational Foundation president, “Reese received the most votes by the trustees, who recognized his dedication to spreading the bridge bug by teaching bridge at a local retirement home and several local schools. Reese is also a teacher/counselor at residential summer bridge camps which the Educational Foundation proudly supports with grants.”

The 19-year-old from Metairie LA was turned onto bridge by “The Cardturner,” Louis Sachar’s fictional story about a teenager who, forced to drive his uncle to the local bridge club four times a week, develops his own interest in the game.

Reese’s parents “know literally nothing about bridge,” he says. “They nurtured my passions for sports, music and chess, but I developed my passion for bridge through my grandmother and great-grandfather.”

Reese’s grandmother mailed him his first Audrey Grant “Bridge at a Glance” pamphlet when he was 10. With guide in hand, he jumped onto Bridge Base Online.

“Many Turkish experts hurled Turkish profanity at me on BBO as I confidently bid with just the pamphlet at my side and without a clue as to what I was doing. I began to catch on by seeing
what generated the least profanities.”

“Losing my grandma and great-grandpa was extremely difficult,” Reese says, “and I still think about them every day. Bridge helps me remember them.”

After nine months online, Reese discovered the Louisiana Bridge Center. He has nothing but praise for Unit 134, who he says has done everything for him.

“As my one hundred new grandmas welcomed me, I loved them back. They’re always so happy to see me. I honestly think that I enjoy the lessons, stories and social skills they’ve taught me more than any masterpoints.”

Reese attended bridge camp when he was 15 years old. For the past two summers, he has served as a teacher/counselor at both the National Youth Bridge Camp in Carlinville IL (2017) and the
Michigan Youth Bridge Camp (2018).

At the Carlinville camp, a senior counselor hand-picked Reese to mentor one particular homesick boy named Caleb. Caleb begged Reese to help him earn his first masterpoints. After their game, the young camper eagerly sprinted across the room to inform Reese that they had picked up a sliver of a masterpoint, and gave him a big bear hug.

Reese says, “Seven weeks later, at the Youth North American Bridge Championships in Toronto, Caleb and Justin (another one of our bunkmates) excitedly showed me the trophies they won by playing as partners. It was gratifying to see how ecstatic my kids were about their bridge success.”

Reese is an Advanced NABC Master. He won the Baron Barclay National Youth Open Pairs at the Youth NABC in Atlanta playing with Kunal Vohra and finished second last year in the National Youth Teams in Toronto playing with Harrison Luba – two of his favorite partners.

Reese applies the lessons he learned at the table to everything he does. “The true reason I love bridge is how I approach life like a bridge player. When life goes tough and the cards don’t split in your favor, you have to adapt and try another line of play.”

Reese attends Yale University, where he is studying statistics and data science.

“I owe much of the credit for my successes thus far to my fellow members of the Louisiana Bridge Association as well as to the game of bridge as a whole,” Reese says. “And let’s not forget the entire network of friends that bridge has given me though the Youth and Junior events for the ACBL and USBF!”

Heller says the Educational Foundation received a record number of applications this year. “In addition, it was a tight field with many strong contenders.” The annual recognition, which awards $2000 in scholarship funds, recognizes a graduating high school senior for their playing record and overall participation in the bridge community.

For a list of previous King/Queen of Bridge winners, go to acbl.kingofbridge