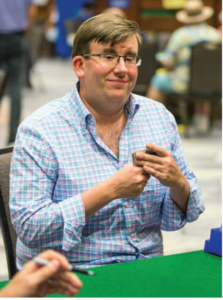 With five-time winner Chris Compton sitting out – he scaled his bridge travel back by about a third – the year started with the race wide open. Mark Itabashi and Kevin Dwyer, who have frequently placed second or third in recent years, planned to make a run for it.

But when Grue racked up more than 1300 points in the first four months of the year – more than half of what he earned in all of 2016 – he decided in May to schedule a few more regionals
and go for the race. He’d never finished higher than seventh.

Grue typically plays in about 22 regionals a year and started the year booking a normal amount. He played in 10 between January and April and picked up at least 90 masterpoints in eight of them. “A lot of that is credit to my teammates playing great,” Grue says. “Gillian Miniter in particular has improved to the point where when we go to a tournament as a foursome, we are now winning most of the events we play in instead of losing in the semis and once in a while getting a victory.” Grue and Miniter often played on teams with some combination of Brad Moss, Justin Lall, John Hurd and Geoff Hampson.

Grue also achieved a lot of success in the three NABCs with partner Moss as part of the Martin Fleisher team, the same platform that propelled Eric Greco to win Player of the Year for winning the most platinum points (Grue finished third in that race). The team won the Vanderbilt in Philadelphia, reached quarterfinals of the Spingold in Atlanta and won the Mitchell Open BAM in Honolulu.

Then came Grue’s favorite event, the Blue Ribbon Pairs. Playing with Bobby Levin, Grue won for the third time in four years (he placed second in 2016 with Greco). Upon arriving in Hawaii, Grue led Itabashi by just 57.53. After Grue’s monster performance there – winning the Goren Trophy with 422.31 masterpoints – his lead was up to 375.94. “To Mark’s credit, he came up to me after I won the BAM and Blue Ribbon Pairs back-to-back to tell me he was calling off the dogs and canceled his last regional of the year.”

They met a week later at the Palm Springs Regional, where Grue was still trying to break the record. When he achieved it by that Thursday, both he and Itabashi canceled their Friday games and went golfing together with their partners Moss and Mitch Dunitz. Moss came to Palm Springs to help make sure Grue broke the record. “As Brad would tell you, for both of us, playing a lot of regionals is great for our bridge game.” 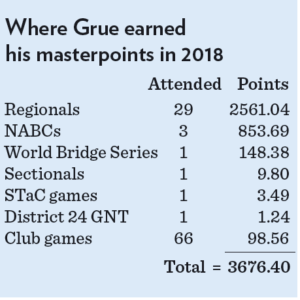 Grue, 37, learned to play bridge at 13 from his parents while growing up in Minnesota. “My grandmother was an excellent bridge player as well,” he says. It was just a few years later when he got his first NABC win in the 1997 Grand National Teams Flight C. In September 2001, just after 9/11, Grue moved to New York City, where he has lived for all but a few years since. After playing a lot of rubber bridge, he decided to become a bridge pro. He won three world gold medals in Junior teams between 2001 and 2006. In 2006, he won his first unlimited NABC title in the Reisinger and has brought that total to 10, including the three last year, when he also won a silver medal with Moss in the World Open Pairs.

“I went from being very good to even better at bridge the past few years from playing more than almost anyone else,” Grue says. “Not just playing with one main partner – I enjoy playing
at regionals with different partners.” Noting his success in the Blue Ribbon Pairs with John Hurd, Greco and Levin, Grue notes, “Choosing a great partner might be my best skill.”