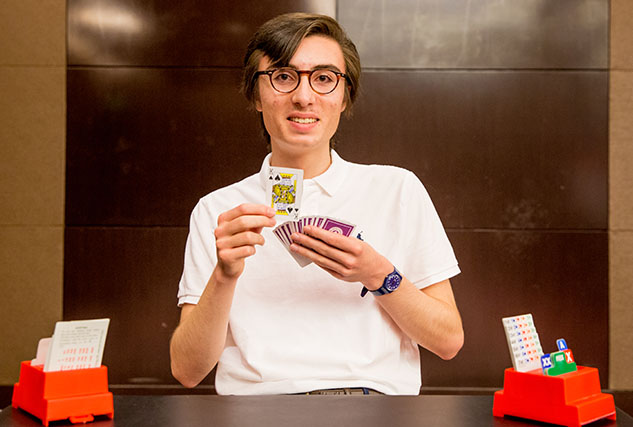 They call him King Louis. It’s almost like it was his destiny to be King of Bridge.

Louis Beauchet, 18, is sure about one thing: It was his destiny to become a bridge player.

As a shy, intellectual child growing up in France (his name is pronounced Louie), Beauchet longed to spend time with adults. Bridge looked like a good way to do that, and he started learning when he was 8. He played in a weekly club game, but never any tournaments, until his family moved to Portland OR when he was 14.

Soon after, he scored a 70% his first time playing in a local regional and began to catch the attention of the area’s top players, gaining opportunities to play with them. In summer 2016, as a 15-year-old, Beauchet went to Washington DC to play on District 20’s GNT Flight C team. Later in the tournament he wound up on a team in the Freeman Mixed BAM, playing on Jade Barrett’s team with Karen Barrett, Donna Lombardini and Dan Hoekstra. They placed third.

A year later in San Diego, he placed 20th in the Blue Ribbon Pairs playing with Portland pro Jon Bartlett after starting the third day in second place. Beauchet also lists among his accomplishments having never gotten angry with a partner.

One thing not on his resume: any involvement with the Junior program.

“I’ve never enjoyed being with people my age,” Beauchet says. “Young people who play bridge have something in common with me,” but not enough for his tastes. “I’ve been asked to join Junior teams and programs. I always say I’m not interested.”

Instead Beauchet has formed many friendships with people three or four times his age through bridge. He feels more comfortable in their company. “I think older people are a lot more steady, calmer, smarter, have more experience,” he says. “I feel like I’m like them.”

Beauchet graduated from high school early a year ago and took a gap year. He’s thinking about starting college this year, probably online – the King of Bridge award is a scholarship – but doesn’t have any specific plans. He’s interested in economics, sociology and philosophy. He’s already playing bridge professionally and plans to continue that. Someday he’d like to start a business, but he doesn’t have anything particular in mind. He also golfs at least once a week.

For two years Beauchet wrote a quarterly column on bridge strategy for The District 20 Trumpet. Late last year, he took over directing the Saturday game at The Ace of Clubs in the Portland suburbs and boosted attendance. He sometimes makes crepes for his players and is also the club’s webmaster. Recently he has started mentoring and playing with students.

Beauchet hasn’t noticed much of a difference between American and French bridge players after playing about the same amount of time in each country. He says bridge players are nice, smart and interesting everywhere. “This is why I love bridge,” Beauchet says. “You get to meet some of the smartest people ever.”

Among his favorite experiences was playing with Bartlett in the Blue Ribbon Pairs. “We had never played together before. We didn’t have a single bidding misunderstanding the whole event.”

Beauchet said it was a great surprise and a huge honor to be chosen for the award by the ACBL Educational Foundation.

It may seem ironic that someone who doesn’t like to play with his fellow young people has been selected as the face of youth bridge. But the job of King of Bridge is to promote the game, and Beauchet does that. Bridge is his passion. And the social aspect of bridge is helping him overcome his shyness, he says.

“It’s always been my destiny,” Beauchet said of bridge. “Right now I don’t have much else in my life. Bridge gives me everything I need to be happy.”