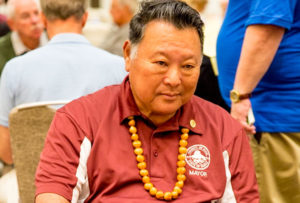 One of the busiest people on the Hawaiian island of Maui traveled more than 2500 miles this week to get away from it all and have a little fun – playing bridge at the Fall NABC in San Diego.

It’s Alan Arakawa, mayor of Maui County and, judging by his tournament results and masterpoint total, a pretty good player. He is a Ruby Life Master with more than 2200 masterpoints to his credit, 150 of them earned this year.

On Saturday, Arakawa and his regular partner, Harry Rogers, posted a 66.54% game to win the afternoon session of the Friday-Sunday Side Game Series.

“It’s my first vacation in seven years,” said Arakawa. Born in Maui, he has lived there all of his life except for a brief time on Wake Island when he was in fourth grade and while he was studying business management at the University of Hawaii in Honolulu.

Arakawa grew up on a farm, raising cattle and hogs and growing “lots of vegetables and flowers.” After college, he was into other businesses, including real estate and life insurance. He also owned a printing and graphics company.

An expert chess player, Arakawa was introduced to bridge by a friend in the real estate business who invited him to a game at a woman’s home. “I didn’t know anything,” he said. Arakawa and his friend did well in the duplicate game and he was hooked.

At the time, Arakawa was running an office for Equitable Life Insurance. When his supervisor in that job found out about his interest in bridge, “he mandated that I keep playing,” Arakawa said. “He said it was a good way to meet people, and he didn’t mind that I wasn’t in the office all the time.”

As one of Maui’s top two or three chess players, Arakawa has donated hundreds of chess sets to school children. “I would teach chess if I had the time,” he said.

Arakawa decided to go into politics during his time as supervisor at a Maui County wastewater management facility. Frustrated at finding it hard to get anything done because of the layers of bureaucracy, he sought a way to change the process. “I decided to work from the top,” he said.

The first step was his successful campaign for a position on the county council in 1994. Four years later, he ran for mayor. He lost but came back in 2002 and was elected mayor. He lost in the next mayoral election but has won twice since then. He is a year away from completing his current term as mayor. With that, he will be the longest serving mayor in Maui County history.

Arakawa plays each year at the Honolulu Regional but rarely travels away from Hawaii to play bridge. In 1977, with just one masterpoint to his credit, Arakawa attended the Spring NABC in Pasadena, but it was only because he was in the area visiting family.

Arakawa said he enjoys playing bridge despite the frustrations that come with the game from time to time. “I enjoy it, but that doesn’t mean it isn’t torture,” he said.

The mayor said he and Rogers always take their wives when they go to bridge tournaments. “We get to play. The penalty is that the wives go shopping. That’s how we even it up.”