If you ban it, they will come 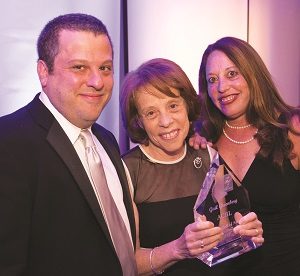 If bridge greatness could be genetically engineered, world champions Jill Levin and Brad Moss got a head start. Their mother is ACBL Bridge Hall of Famer Gail Greenberg, a multiple world-gold medalist and North American champion 17 times over.

Although the family played many games, Gail adamantly did not want her children to learn bridge growing up.

“I think that young people’s priorities should be on their studies, their friends and sports,” Gail says. “I’ve seen many brilliant people get off track because of bridge.”
Perhaps it was the forbidden nature of the game that made it attractive to young, headstrong Jill.

Jill says her first lessons were through osmosis. “Mom taught out of our house. We were around bridge players all the time. Also, we played other card games – I learned to count cards playing hearts.”

Gail remembers: “When Jill was 9 or 10 years old, she came home from school one day and, with her hands on her hips, stomped her foot and said, ‘Aha! We’re having an afterschool bridge activity, and you can’t stop me from playing.’”

In high school, Jill wanted to go on expensive ski trips. As chance would have it, the chaperones for the trips needed a fourth for bridge. Though she still had no formal teaching, she felt she had picked up enough to finagle a deal that allowed her to play bridge and ski free.

Jill says it was at that point her mother relented and agreed to teach her. “She couldn’t have her progeny out there playing strong four-bids.”

Jill’s first memorable tournament experience playing with her mother was at the Southeastern Regional.

“I had taught 7-year-old Brad how to count points, and if they added up to 12, to open one of his longest suit. At some point during the tournament, I opened a little light. Brad came up to the table, looked at my hand and loudly announced, ‘You told me I needed 12 points to open.’ Our opponents took this unauthorized information well.”

At the 1995 Summer NABC, Jill and her mother paired up to play in the Wagar Women’s Knockout; their team won the event. They went on to win the women’s team trials the following spring. The death of one of the team members meant a reconfigured structure going into the World Olympiad in 1996: Jill and Gail were teammates, but not partners, when they took the World Women’s Team winner’s podium in Rhodes, Greece.

“My mother also captained our Venice Cup–winning team in Shanghai in 2007,” Jill adds.

Jill says her children, Shane Blanchard, Justin Blanchard and Andrew Levin, “weren’t much interested in bridge when they were growing up.” But she beams with motherly pride as she discusses Shane’s accomplishments, including an NABC title in the North American Pairs, Flight A, in 2011.