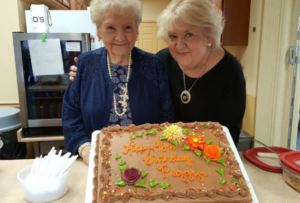 Although she’d been playing bridge her whole life, it wasn’t until she was 85 that Peggy Kincaid of Evansville IN joined the ACBL in 2006. Over the next 10 years she gave little thought to becoming a Life Master. Though she played only in Evansville and had just 3 gold points from the regional there in 2012, she didn’t need anything else. Having enough silver points from local sectionals and red points from North American Pairs club games, she had fulfilled all the other requirements by the time her daughter, Jane Perkins, became a Life Master in January this year. Perkins had only been playing since she retired and moved back to Evansville from Wisconsin in 2013.

Inspired by her daughter’s achievement, Peggy decided to go for the 22 gold points she needed. She asked Jane to go with her to a regional in Effingham IL in June. In addition to earning nearly 8 gold points there, the experience was overwhelmingly positive, Peggy says. “We had so much fun and we met the nicest people.”

The mother and daughter soon traveled to regionals in Nashville in July and St. Louis in August. Players and directors she’d met in Effingham, along with fellow Evansville players, cheered Peggy on as she crossed the finish line in St. Louis, three weeks before her 96th birthday.

“This has been a sweet ride – one we shall treasure forever,” says Jane. Peggy says she’s proof that one is never too old to pursue Life Master. “Traveling, making new friends and just plyaing this game will add such happiness to your life.”