After two weeks of bridge class at Williams College, we attend our first regional

In early January, six brave students from Williams College in Williamstown MA signed up to take an ACBL College Initiative course on “Tournament Bridge” with Atwell Professor of Mathematics Emeritus Frank Morgan and consultant Jim Berry. They soon played in a regional. Their report of the experience, complete with some of their own bridge analysis, is presented here.

Max: “None of us had played bridge before. After two days of introductory classes, we – Max Everett, Jihoon Kim, Geoffrey Lu, Robert Nielsen, Alex Simons and Miranda Wang – started competing at the Pembury Bridge Club in Pittsfield MA. After two weeks of classes and club play, we spent five days at the Joan Gerard Winter Regional in Tarrytown NY. All six of us earned masterpoints.

There was one particularly memorable deal in the Swiss teams: It was our first time bidding and playing a slam:

Alex opened 1♥. Max responded with Jacoby 2NT, showing a strong hand with heart support (we’re still doing it with just three pieces). With his strong hearts and a void in clubs, Alex knew we had slam potential. He bid 3♣ to show a club control (we don’t know about bidding shortness yet). In hindsight, he realizes he had controls in all suits and could have gone right to 1430 key card. Max bid 3♦ showing slam interest and a diamond control. Now Alex jumped to 4NT to ask for key cards. Max responded 5♥, showing two or five key cards without the ♥Q, so Alex knew that Max held the ♣A and the ♦A. Alex went to 6♥.” 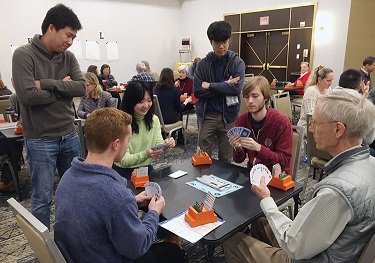