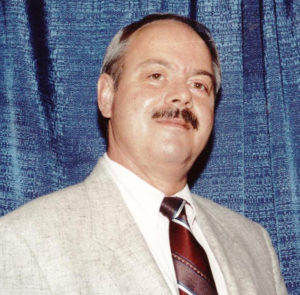 Speaking from experience, I always referred to Tom Quinlan as the kind of friend who would drop everything and bail you out of any sticky situation, even if it meant a cross-country flight.

When Tom died in June at 76, after a short battle with cancer, bridge players everywhere lost such a friend.
Starting in 1964, Tom – known to many simply as TQ – rose through the directorial ranks to where he attained the lofty post of national director-in-charge starting at the Anaheim NABC in 1987, and holding that position until after the Orlando tournament in 1998.

It would be a most difficult task to touch on all the hats that Tom wore in his 50-plus years as a working member of the ACBL While ascending to the presidency of the Professional Tournament Directors Association, Tom served District 21 in a variety of capacities – not the least being editor of the Contract Bridge Forum.

Former ACBL President Ken Monzingo said he first met Tom when taking over as editor of the Forum. “The transition from Tom to me was smooth and a great friendship developed immediately. I loved the man; his calm nature, sense of humor, and understanding were a great influence.”
Monzingo said that while Tom went on to be a top director, they shared one honor. “We published the Forum for more than half a century together. Both of us took great pride in that, and our friendship only grew as the years went past.”
“That’s just another blow to our generation,” Mike Lawrence said upon hearing of Tom’s passing. Lawrence added that he had known Tom since the ‘60s, and that while directors and players often traveled in different circles, “Tom was a pleasure. He was a delight.”

Lawrence recounted a story about a regional where TQ was the director. Lawrence, waiting for a pair to finish playing at the next table, noticed that the declarer was hunched far over in his chair, displaying an unusually large plumber’s crack. In a moment of mischief, Lawrence decided he would try to scandalize TQ by discreetly calling him to the table.

“I need a ruling,” said Lawrence.

“That,” said Lawrence, gesturing to the next table.

Deadpan, TQ took in the spectacle and said, “Let me get my rule book …” before quickly retreating.

National Director Matt Smith said Tom was model for him of what a professional tournament director should be.
“He seemed to know everything,” Smith said. “He never lost his cool, and he was a relentlessly hard worker who was always prepared.”

Smith added that Tom had an amazing ability to deal with difficult or upset players.

“He seemed to always turn volatile angry players into meek submissive individuals after a short heart to heart conversation.

“On top of all that, Tom had a wicked sense of humor that made being around him constant fun. I don’t think it is too much to say that – by his example – Tom inspired a generation of directors to be the best they could be. I know that’s true for me.”

Smith said he recalled an incident at a regional in which TQ had to deal with an unusually slow pair that was disrupting an entire section. After finishing late in yet another round, TQ approached the offenders with an unctuous smile and politely asked to speak to them away from the table. The tone, however, quickly changed.

“How large would the penalty have to be for you to decide that you need to pick up the pace?” he asked.

“He enjoyed setting up large tournaments and liked to design the most efficient way to move the people and the boards,” Janice said. “Those skills were particularly important at the 1991 Las Vegas National where the table count topped 24,000.”

Janice said patience was his strong suit. “As a director, he was a patient and affable listener – even the most agitated player usually left his ‘office’ smiling.”

“In addition to playing bridge, TQ loved music from classical to country, and he particularly enjoyed listening to jazz from the local radio station. He was a good cook and grew his own herbs for making sauces and marinades.”