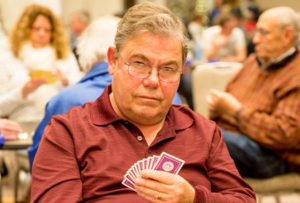 Of all the tournament directors who have ever worked for the ACBL, Mike Flader was the happiest at the advent of computer scoring for bridge games.

It all goes back to how he got his start as a TD.

Flader had learned how bridge is played by reading books on the game, his interest piqued by the bridge games his parents played at home in the Minneapolis area.

In 1968, Flader was a student at the University of Minnesota. One day, he walked into the student union and saw several tables of bridge play. Among them were future stars of the game, including Howard Weinstein and Steve Garner. Flader joined in and soon found himself at a duplicate club. “I was basically hooked,” he says.

Flader worked his way through college – at the student union and later in the Athletics Department. He managed the golf course on the U of M campus during the summer and the ice rink in winter. “That was the best job I ever had,” he says.

He was lured away from that position when he was offered the job of running the Twin Cities Bridge Center, which he did for 15 years.

In 1989, TD Larry Brobst, who is working at this tournament, started Flader’s TD training. “He gave me a score sheet for a 15-table game,” Flader recalls. The assignment was to matchpoint and score the game. “I started on a Friday afternoon,” Flader recalls, “and I was still working on Sunday. My salvation was computer scoring.”

The slow start notwithstanding, Flader did well enough to be offered full-time employment with the ACBL in 1994. He retired in 2016. Along the way, he earned formal recognition for his good work as a TD, accepting the Jane Johnson Award from ACBL Headquarters for excellent customer service. He earned the Tom Weeks Award for professional development from the tournament directors’ association.

Flader’s work as a TD was recognized again in 2000 when he was promoted to associate national rank. “Fortunately,” he says, “I was really good with the players, but I was not as detail-oriented as some of the best directors.”

Flader decided to retire last year because “the traveling got harder, and I was away from Jill an awful lot.” Jill is Flader’s wife of 25 years. They met when she was taking bridge lessons from him at the bridge center in Minneapolis. He describes their union as “the best thing that ever happened to me.” He even remembers the first time they played duplicate together – July 8, 1991 – and he celebrates that day every year. They live in Eagan MN, in the Minneapolis area.

At home, he teaches bridge at private clubs and plays whenever he gets the chance. A good player, he has his eye on high achievement in the bridge world. “I wouldn’t mind winning a national championship,” he says.

Flader is playing bridge at the Fall NABC in San Diego and visiting with former colleagues in the TD ranks. “I really miss all the people I used to work with, like Rick Beye and Tom Marsh,” Flader says.

Lately, Flader has taken up walking for exercise. “I’d like to live a while longer,” he says. All in all, he’s a man with a positive outlook. “Life is great,” he says.