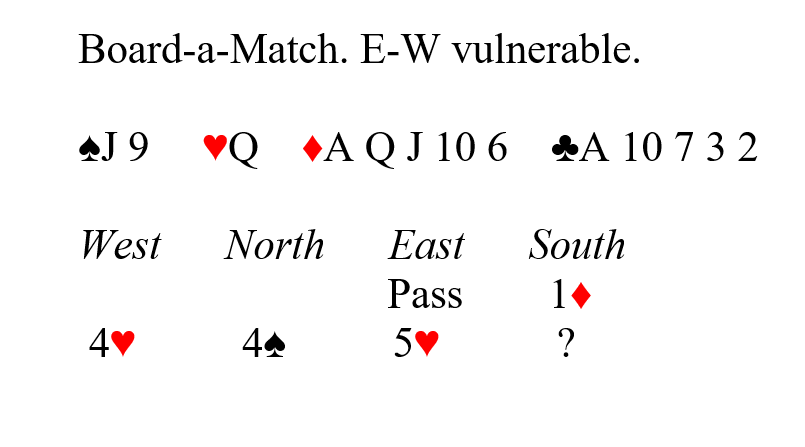 For yesterday’s It’s Your Call deal (from May 2009’s Bridge Bulletin), Pass was named top bid.

Once again preempts have given you a problem. The majority of the experts passed the decision to partner.

“Pass,” said August Boehm. “This is a neutral action, holding decent prospects for both offense and defense. Whether partner doubles or bids on, I’ll be charmed. Why guess in the direct seat?”

Kerri Sanborn agreed with pass. “This is not a forcing auction because nobody knows whose hand it is,” she said. “If partner has stretched to bid with a long spade suit, we should probably be defending.”

“What bad can happen if I pass?” asked Lynn Deas. “This is not a forcing pass auction in my book. If partner passes, we will try for a plus score. If pard doubles or bids 5♠, I am thrilled.”

“Pass,” agreed Richard Freeman. “5♠ could be right, but I’ll let partner decide. If he passes, so be it.”

Allan Falk also passed. “It’s not clear we can beat 5♥ or make 5♠. The vulnerable opponents are presumably not crazy.”

“I’m not sure what to bid,” said Barry Rigal. “Pass shows that.”

“Pass,” echoed Mike Lawrence. “This is not forcing because 4♠ was bid under pressure.”

Janet and Mel Colchamiro agreed with Robinson. “This is not a forcing pass situation because who knows what partner’s 4*S* bid was based on. Partner may have already won the board with his 4♠ bid when nothing makes at the five level.”

The Colchamiros gave a sample hand for North that is similar to Robinson’s.

“You don’t have enough spades to bid 5♠,” said Larry Cohen, “and not enough hand to insist on a slam. I don’t want to double, however, and discourage partner from taking further action. Pass is middle of the road.”

Several experts chose double, including Jill Meyers. “There is no guarantee that we’re making 5♠, and I think they are going down. East should have some freak hand for bidding 5♥ as a passed hand at unfavorable vulnerability, and that means at least one of my suits is not splitting. Of course, if East has a freak, they may make 5♥. I don’t play that pass by me is forcing in this auction.”

Karen Walker agreed with double. “There’s no guarantee that we have more than a seven-card spade fit. Because 4♠ was bid ‘under duress,’ this is not a forcing pass situation.

“I don’t think they can make it and 5♠ doesn’t look like it will make,” said Don Stack.

“Partner should know that double is not based on trump tricks,” said Peggy and John Sutherlin. “He can pass or pull to 5♠ with a seven- or eight-card suit. Partner was under pressure over 4♥, so we need to give him some slack.”

“Double,” agreed Kitty and Steve Cooper. “We have good defense.”

“5♠,” said Betty Ann Kennedy. “Partner was under pressure to bid at the four level.”

Presumably, she expects to make 5♠ and doesn’t bid more because the 4♥ bid put partner in an awkward position.

Kay and Randy Joyce sum up the problem well. “Vulnerable opponents usually have the values to justify their bids,” they said. “We pass because there is no guarantee that anything will make or that we can set them. Maybe partner will know what to do.”