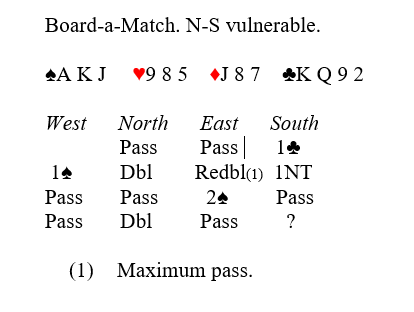 “Pass,” said August Boehm. “Anyone who doesn’t convert this cooperative double is forever labeled a chicken.”

“Double is penalty,” said Steve Robinson. “I don’t know if West is an honest citizen, but I trust partner.”

“After passing 1NT, the double is penalty,” said Karen Walker. “I’m happy to be loaded in spades.”

“I pass,” echoed Jill Meyers. “I showed my hand and partner doubled. He could have chosen 2NT instead.”

“It is tempting to go for plus 120 in 2NT versus 100 in 2*S* doubled, but we have a good chance for plus 300,” said Janet and Mel Colchamiro. “If partner didn’t want us to pass with this spade
holding, he should have reopened with 2NT.”

“Pass,” said Mike Lawrence. “I suspect that East has only two spades and has made a bad bid. We rate to defeat this a lot on high cards alone.”

“If bidding were right, partner would not have done what he did on the last two rounds,” said Barry Rigal. “We might take West to the cleaners.”

Other experts thought they could make plus 120 in 2NT, but weren’t so sure they could defeat 2♠ more than one for plus 100.

“2NT,” said Kerri Sanborn. “I can’t stand to defend a probable eight-card fit. Even if we beat them one trick, we might make plus 120 in notrump.”

“Bidding 2NT is looking for a better plus score than plus 100,” said Kitty and Steve Cooper.

“We should be able to grind out eight tricks,” said Richard Freeman. “If not, they might well make 2♠.”

“We might not be able to beat them more than one, or even beat them at all,” said Don Stack. “I will bid what has to be a great contract after the expected spade lead.”

Does the law of total tricks apply here? What does Mr. Law say?

“There’s a good chance we’ll make 120 if we were getting plus 100 in 2♠ doubled,” said Larry Cohen. “I hope they lead a spade so my ♠J will take a trick on offense, but not on defense.

“In case anyone is wondering, the ‘Law’ for notrump versus a suit contract says: Add seven to the number of trumps. I expect they have eight trumps, so 15 total tricks are available. Somebody is making eight tricks. If you count the ♠J as an extra trick on offense, it is possible that both sides are making eight tricks, and by bidding 2NT I am converting minus 470 into plus 120.”

What would you do?