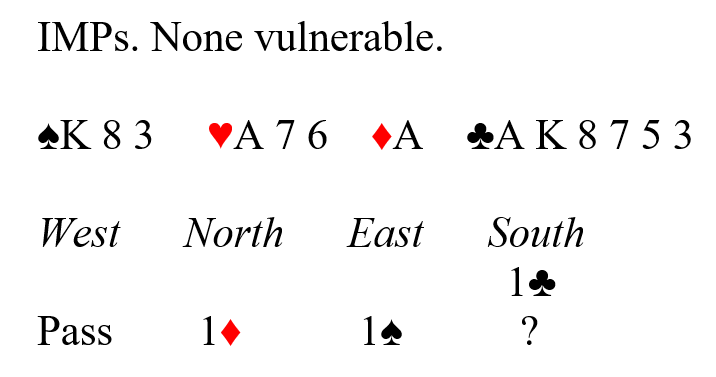 A good problem is one that has at least three possible answers. This one has five.

You have a six-card club suit and extra values, but there are flaws with all the possible calls. Three panelists chose the straightforward 3♣.

“3♣ is an underbid for sure,” said Kerri Sanborn. “It looks like I want 3NT played from the other side, but I could miss a game when partner has ♣Q 6 2 and not much else. If clubs don’t run, it is wrong to play notrump. If we have a slam, 3♣ will be a better start to get there.”

“3♣ describes the strength of our hand and gives partner a chance to play 3NT from his side,” said Peggy and John Sutherlin. Partner can bid 3♠ with a club fit and enough values for game. If partner passes, it’s unlikely we will miss anything.”

“3NT shows a big hand with at least six clubs,” said Jeff Meckstroth. “Yes, it might be better for partner to play the contract, but you have to distort your hand to try for that.”

“3NT,” agreed Bridge Baron. “I’ve seen how humans defend. This will be a piece of cake.”

“What is Hamman’s Rule?” asked Janet and Mel Colchamiro. “Oh yes, if 3NT is a possible contract, bid it.”

Others feel that there are other bids that don’t exclude 3NT later.

“2♠,” said Jill Meyers. “If partner has a spade stopper, I want the lead coming to her hand.”

“This is a tough problem,” said August Boehm. “3♣ feels too timid, while 3NT overstates the clubs and risks wrong-siding the contract, so I choose 2♠. Partner may expect diamond support, but I can correct a diamond rebid to notrump and be no worse off. Sometimes, partner makes an enlightening response.”

Larry Cohen agreed with 2♠. “The hand is too strong for 3♣, too wrong for a phony reverse into 2♥, and it’s too committal to bid 3NT. I don’t think 2♠ promises diamond support, but rather a good hand. I would love it if partner bid notrump from his side.”

“This is a good hand,” said Kitty and Steve Cooper, “and we think 2♠ is forcing to at least 4♣. There is no reason to reverse into your three-card heart suit when you have a good alternative.”

Allan Falk agreed with 2♥. “I would like to bid 3♣, but that is a huge underbid and misdescription because my club texture is so poor. I’m worth 2NT, but unless North has a club fit or second spade stopper, that will lead to a hopeless contract. Bidding 2♥ is safe because partner would have bid 1♥ with four hearts and a weak hand. This keeps the bidding low so we can explore our options.”

“2NT is the same thing I would have bid if East passed,” said Karen Walker.

Don Stack agreed. “This is the same bid I would have made if right-hand opponent had passed,” he said. “If I had one less club and one more diamond, this would be a picture-perfect bid. If we have a club slam, we might still get there.”

This is the sort of hand that is more easily bid if playing a big club system. Playing standard, all choices have a downside, and the variety of votes reflected this.