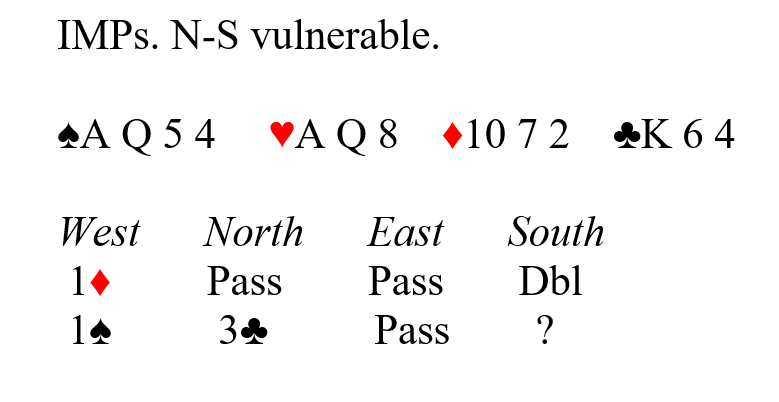 You likely have game, so what’s the best way to find out? Half the panel chose 3♠. Why?

“When searching for 3NT,” said Kerri Sanborn, “we bid the stopper we have when the opponents have bid two suits.”

“3♠,” agreed Barry Rigal. “I bid my spade guard looking for 3NT. I’m expecting ♦Q J 3 and ♣A Q J 8 7 or something similar. If so, we have eight winners on top, and an endplay in one of the majors will be just about guaranteed.”

“The opponents have bid two suits, so my three-level bid shows the one I have stopped. I’m hoping for 3NT opposite a diamond stopper.”

“Isn’t this a textbook situation of bidding the stopper I have when they’ve bid two suits?” asked Mel Colchamiro. “Even if it wrong-sides the notrump, North should be able to endplay the opener.”

“3♠,” echoed Jill Meyers. “Partner should bid 3NT with a diamond stopper. I would feel better if I thought partner had six clubs, but even with ♣A Q J 8 7 and a diamond stopper, North should be able to execute an endplay to make West lead a heart into the ♥A Q. At matchpoints, I might pass, but at IMPs, and vulnerable, the reward is worth the risk.”

“We cuebid the suit where we have a stopper,” said Peggy and John Sutherlin. “We can stand the lead through the ♠A Q. East will get to lead only at trick one, so there’s no danger of attacking the ♠Q a second time.”

“I have an ace more than I promised,” said Karen Walker. “3♠ shows spade values and asks for a diamond stopper.”

The rest of the panel chose other actions.

“3♦,” said Betty Ann Kennedy. “I’ve already implied spades by my takeout double. If partner has a diamond card, then 3NT is where we need to be.”

“Pass,” said Allan Falk. “To make 3NT, I would need to find partner with a diamond stopper and six running clubs. If partner has five clubs, they may not run because of a bad split. I’m putting the green card on the table.”

The Bridge Baron bid 4♣, but offered no reason.

Some panelists bid 3NT themselves.

Mike Lawrence: “I don’t want to bid 3♦ and have North play the hand.”

Don Stack: “I’m bidding what I think our side can make. Bidding 3♦ would lead to a confused auction.”

Steve Robinson: “I’m bidding what I think we can make. Diamonds weren’t supported, and West ran from 1♦ doubled.”