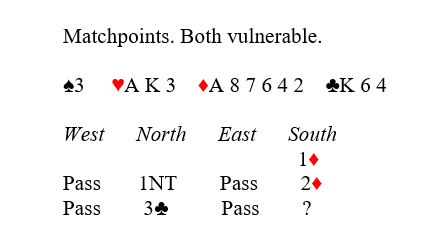 Expert players reevaluate their hand during the auction. There are 14 high-card points, but the hand has grown tremendously — no expert passed.

The panel divided into several groups. Five panelists took a practical approach and raised clubs directly while some raised clubs via a 4♠ splinter bid.

Other panelists probed with a 3♥ call. Your side could still have a game in 3NT, and this would be the best way to explore for it while not ruling out a club contract.

“3♥ shows a fit for clubs and values in hearts,” said Barry Rigal. “Bingo! Now we can let partner make the last mistake.”

“I’m bidding 3♥ and will bid 4♣ over 3NT,” said Jill Meyers. “That should show this hand. I would consider splintering to 4♠ directly, but I would rather have better diamonds.”

Others don’t agree that 4♠ promises a better diamond suit.

“4*S*,” said Don Stack. “This is a fantastic hand on this auction. Partner has one or no diamonds and seven or eight clubs. A splinter in spades showing slam potential with controls in the lower suits gets this message across.”

“4♠,” agreed Larry Cohen. “Let’s make a big bid. Slam could be laydown. Normally, I don’t push when we might already be ahead of the game, but in this case there is no harm in bidding 4♠ in that I am not worried about tipping the lead — I can withstand a heart lead.”

“4♠,” said Lynn Deas. “Why not show my spade shortness on the way to 5*C*? It doesn’t take much from partner to make slam — perhaps a hand with a singleton diamond and good trumps.”

Mike Lawrence agreed with 4♠. “I could jump to 5♣,” he said, “but that would leave North wondering where my values were.”

“5♣,” said Kerri Sanborn. “This should make and be a good score. No reason to try for a skinny slam and risk a bottom.”

Allan Falk agreed with 5♣. “This should be a great contract, and no one gets to 5*C* at matchpoints,” he said. “It’s tempting to bid 4NT and then slam if partner has one key card. The advantage of a direct 5♣ bid is that you don’t tell the opponents anything in case there’s an effective defense.”

“4NT is Key Card Blackwood for clubs,” she said. “Partner usually has seven clubs, and if he has one key card, 6♣ should be a claimer. 3♥ or 4♠ show extra strength but rate to be a wasted effort, as I can’t imagine that partner will be able to bid anything but the minimum number of clubs over either of those bids.”

“Maybe I should bid 5♣. I’m willing to let partner out in four,” said Jeff Meckstroth.

All the experts reevaluated the hand during the auction. Most of them insisted on game and several tried for slam. The bid you make over 3♣ depends on whether you want to engage partner in the final decision, and which bid (3♥ or 4♠) gives the best information.