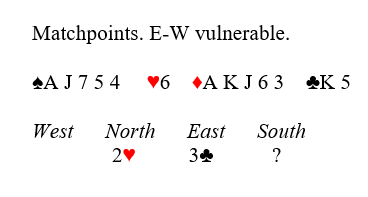 You have a strong hand, but you don’t have a fit with partner. The majority went the penalty route.

“Double,” said Peggy and John Sutherlin. “This is an ugly matchpoint double. We have four tricks and need a little help from partner.”

“Double,” echoed Mel Colchamiro. “This is perhaps unorthodox with only two clubs, but with four-plus tricks in my hand, plus 200 or more is likely. This is a good shot for a matchpoint top.”

“Double is for penalty, but I won’t be displeased if partner removes it,” said Don Stack. “I have what appears to be four defensive tricks, and partner can easily contribute.”

Partner isn’t allowed to remove it with anything resembling a weak two-bid.

“Double should net us plus 200, and it might be better than that,” said Mike Lawrence.

“I double at matchpoints,” said Jill Meyers, “although I would pass at IMPs.”

“I don’t open 2♥ on six rags and out,” said August Boehm, “so double becomes easier.”

“I double with a silent ‘ugh,’” said Karen Walker, “but I’m not letting them play 3♣ undisturbed at matchpoints when I have this much.”

“I double and take my chances,” said Lynn Deas.

“I pass and greedily hope for more bidding,” said Larry Cohen. “If so, I’ll start with the red cards.”

“There is no guarantee we can set 3♣,” said Allan Falk. “Venturing into new suits has no safety net, so I’ll go quietly.”

Three panelists bid something else.

“3♠,” said Jeff Meckstroth. “This is a difficult problem, and I hope to find a spade fit or a very good heart suit from partner.”

“4♥,” said Barry Rigal. “A disciplined weak two-bid should give us a play for 4*H* with the *C*K working overtime. Double would work if we have no game, but I’m prepared to bet against that.”

Kay and Randy Joyce summed up the problem: “Double got most of the support for good reason,” they said. “Vulnerability and form of scoring suggest the double, not to mention a wealth of quick tricks and a partner who can contribute. You may be sorry, however, with some hands that right-hand opponent could hold.”