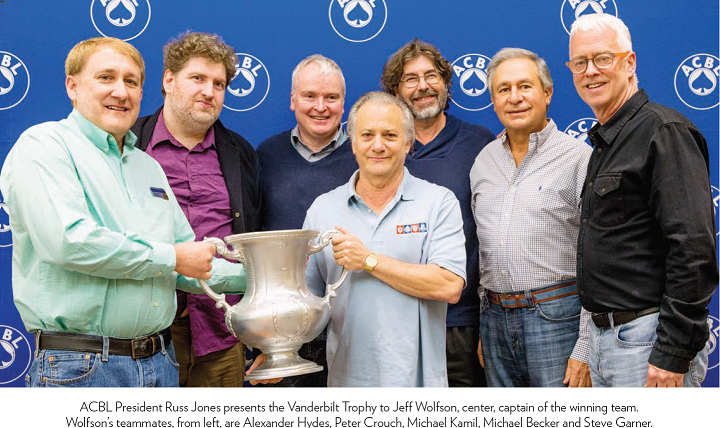 At the Spring NABC in Memphis, the team captained by Jeff Wolfson cruised to a win in the Vanderbilt Knockout Teams, defeating Nick Nickell’s squad in the final, 127–102. Wolfson played with fellow Chicagoan Steve Garner, Michael Becker of Boca Raton FL, Michael Kamil of Oro Valley AZ and the UK’s Peter Crouch and Alexander Hydes (who now lives in Croatia).

This was the first victory in the Vanderbilt for the members of the Wolfson team except for Kamil, who won in 1990 and 2011, and Becker, who has five previous wins in the contest.

At 75, Becker is now the second-oldest person to have won the Vanderbilt. The oldest? His father, B. Jay Becker, won the event in 1981 when he was 76. Michael was on the same team.

In all of their matches, Wolfson and company led their opponents at the end of each quarter with one exception. In the round of 32, WOLFSON faced the No. 49 seed, led by Australia’s Tony
Leibowitz. The four-handed Leibowitz team included Norwegian players Espen Erichsen, Tor Eivind Grude and Christian Bakke. LEIBOWITZ led WOLFSON after the second and third quarters of their match, but lost 109–91. There was no shame for WOLFSON in having a close call against a lower-ranked team: LEIBOWITZ went on to win the Jacoby Open Swiss Teams later in the tournament.

NICKELL, too, had little trouble reaching the final, as they mowed down the competition in match after match. Indeed, half of their opponents withdrew before completing the full set of boards. It was only in the final when NICKELL finally trailed an opponent in a match, but the first quarter against WOLFSON was an expensive one for the Nickell crew, as they fell behind
33–1. Although a 32-IMP deficit is not insurmountable, it proved to be too much of a hole to climb out of when WOLFSON played solidly for the duration of the match.

The first double-digit swing of the set: