Eric Greco earned 889.82 masterpoints in 2018. That’s not very many by the standards of top players. It wasn’t enough to crack the top 100 places of the Barry Crane Top 500 race. But unlike all those ahead of him, Greco plays bridge just six weeks a year, and only in national-level events, where platinum points are awarded. As is usually the case for Greco, all of the points he earned in 2018 were platinum.

And for the second time in three years, Greco had more platinum points than anyone else, making him Player of the Year.

Since the 1990 introduction of platinum points, only 19 people have ever been Player of the Year, and only four have previously won more than once: Zia Mahmood, Bob Hamman, Jeff Meckstroth and Michael Rosenberg. “It is an incredible honor to be only the fifth player to win this award twice,” Greco said. “The other four are all true legends of the game, and to be mentioned
in the same company as them is very humbling.”

Greco has 17 open North American titles plus two more in limited events, 11 second-place finishes and one world championship in the 2010 Rosenblum.

Greco’s success in 2018 was anchored by his status as a member of the Martin Fleisher team, which had a terrific year with wins in the Vanderbilt and Mitchell Open BAM and high finishes in three other events: fourth in the Reisinger, quarterfinals in the Spingold and eighth in the Roth Open Swiss Teams. The team’s members – Fleisher, Chip Martel, Joe Grue, Brad Moss, Greco and partner Geoff Hampson – occupy six of the top seven spots in the standings for the Player of the Year race, and the points they earned as a team were enough to guarantee each of them a spot in the top 10.

“Due to their great play, we were able to win the Vanderbilt this year by never trailing after any quarter in any match, which I thought was a great accomplishment,” Greco said. “They are
all truly great players, great teammates and, most of all, great people.”

Greco especially credited his main partner, Hampson. “He is a phenomenal player, and the large majority of the points I won were with him.”

Outside of the team events, Greco played with Hampson in the Platinum Pairs, where they placed sixth, and the Nail Life Master Pairs. He played with teammate Moss in the Blue Ribbon
Pairs, placing ninth.

Greco strayed outside Fleisherland for just one event in 2018: the von Zedtwitz Life Master Pairs, which he played with Mike Passell. They finished third. It was that result that placed him ahead of his teammates – “the gentlemen who equally deserve this award this year,” Greco says.

Hampson and Greco agreed years ago to play some of the pair games with different partners. “I have found some great ones over the last few years,” he says.

Going into the last round of the von Zedtwitz in Atlanta, it was Hampson who was leading with Richard Katz, while Greco and Passell were sitting in fifth. Had that result held up, Hampson
would have been Player of the Year. But two boards later, Hampson and Katz had fallen to fifth while Greco and Passell moved up to third. “That last round gave me the award over him, which is
how close the game of bridge can be these days with all the great players out there,” Greco says. 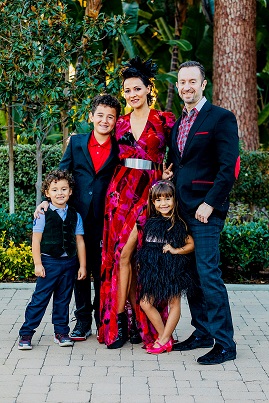 Since last winning Player of the Year in 2016, Greco’s life has changed in one significant way: He and his family moved from the Philadelphia area to Beverly Hills CA in mid-2017. Greco’s
wife, Carmelita, a fashion designer, decided to open a fashion/art space in Los Angeles, which prompted the move. Her business, Luz Art, combines an art gallery with a clothing store. Greco, a stock and options trader for 21 years, does all of his work online, so the move didn’t affect his work at all.

However, he’s cut back on his working time significantly. “I don’t work that much these days so I can spend as much time as possible with my kids” – Giulio, 10, Vivienne, 5, and Leo, 3 – “and playing bridge!” Though he plays only the three NABCs each year and sometimes world championships, Greco has more time to practice bridge online. He’s also enjoying the weather and the outdoors in Southern California.

Greco couldn’t remember any hands he played in 2018 that contributed to his success. “I usually purge the good ones out of memory quickly and the bad ones linger on,” he said. But he recalled two examples where his partner and teammates helped.

The Fleisher team’s impressive run through the Vanderbilt was the corner-stone of Greco’s win. Here, teammates Grue and Moss got a good result in the first quarter of their semifinal match
against the Diamond team – John Diamond, Brian Platnick, Boye Brogeland and Espen Lindqvist.

Grue and Moss reached the spade slam in the face of five-level interference when Diamond raised his partner’s preempt.

At the other table, Brogeland and Lindqvist also got to 6♠. The first three bids were the same, and when Hampson passed, Lindqvist asked for key cards.

At both tables, declarer won the club lead, pulled trump, led a heart to the ace and the ♥J to East’s queen. At that point they claimed, because a crossruff can establish the fifth heart for a diamond pitch.

The push saved 13 IMPs for team Fleisher. “It’s nice to count on your teammates to push these type of hands,” Greco said.

As the Fall NABC in Honolulu was winding down, Bobby Levin was leading the Player of the Year race. But the Nickell team, for which Levin plays, did not make it to the final of the Reisinger – the last day of the year to earn platinum points. The Fleisher team needed to place at least fourth in the Reisinger for Greco to gain enough points to pass Levin. They did so on the nose, just 0.09 ahead of the fifth-place team. This board from the first final earned a crucial point.

Hampson could have opened a 14–16 1NT, which Greco was likely to pass. That would have been a loss, as at the other table, Gaylor Kasle opened a 15–17 1NT, and the 1-point difference
in range was enough for Drew Cannell to bid Stayman and then game after finding the spade fit.

Instead, with his three 10s, Hampson upgraded to a strong, artificial 1♣. Greco’s 1♥ showed 8–11 HCP, enough to force game. Hampson showed a balanced 17–18 with 1NT and Greco used puppet Stayman, finding Hampson with five spades. Greco’s 3♠ showed four trumps and unspecified shortness. Hampson asked where it was
with 3NT, and Greco showed the short hearts. Hampson then asked for key cards and, finding two, bid the slam.

The slam is good whenever clubs are 3–3, or spades are 2–2 with clubs 4–2, or the ♦Q J are both onside when spades are 3–1 and clubs are 4–2. On the actual layout, the conditions are favorable in each of those suits.