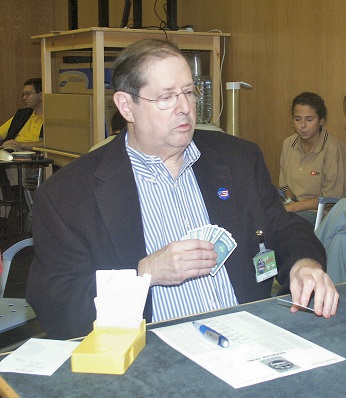 The inaugural Soloway Knockout Teams will take place at the Fall 2019 North American Bridge Championships in San Francisco. The new, top-tier (“NABC+”) contest begins with a two-day Swiss qualifying round from which 32 squads will advance. Five days of head-to-head knockout matches will follow to produce a single winner.

The contest awards platinum points, which are even available from match awards in the Swiss qualifier.

The Soloway KO will begin Friday, Nov. 29., and concludes on Thursday, Dec. 5. The contest will not conflict with the venerable Reisinger Board-a-Match Teams, which begins Dec. 6, but teams who successfully advance to the quarterfinal round of the Soloway will be unable to play in the Kaplan Blue Ribbon Pairs, which runs Dec. 3–5.

The new contest is named in honor of late Hall of Famer Paul Soloway, a multiple world and NABC champion, as well as the former all-time ACBL masterpoint leader.