Bridge clubs across the country found themselves in dire straits in mid-March when the coronavirus pandemic forced them to close their doors indefinitely. The situation was especially bleak for many of the ACBL’s largest clubs – those in big cities with high overhead costs. It was crucial for them to find a way to generate revenue during the shutdown.

The wave of club closings began around the time the Columbus NABC was canceled on March 12. Four days later, the ACBL recommended all clubs shut down. It was less than two weeks from then that the virtual clubs program launched. Clubs run games on BBO, with registration limited to people who have played at that club in the past year.

It began on March 25 with 19 tables of players from the Bridge Club of Atlanta and quickly grew. Within five days, there were 25 clubs hosting 354 virtual tables. A week later, there were over a thousand tables per day with 83 clubs participating. A week after that, 154 clubs generated over 2000 tables.

These numbers represent the single-day performance on Monday, the busiest day of the week for ACBL clubs. The total number of clubs participating in the program was greater at each stage because not all play on Monday. As of the end of April, 435 clubs have run at least one virtual club game. There are about 20,000 tables a week.

Greg Coles, the ACBL’s director of bridge services, is extremely proud of the progress virtual clubs have made. “This project is the coolest thing the ACBL has ever done,” he said. “This project has saved many clubs from going under. It’s given our players an activity to do while they are stuck at home. Many would have left bridge and done something else without it.”

A key element of the virtual clubs program is that clubs set their own prices. The same $1 per table clubs would normally pay goes to the ACBL for sanction fees. BBO takes 20%. The rest goes to the club. For example, with an entry fee of $6, a club would get $4.55 after paying $1.20 to BBO and 25 cents to the ACBL.

There’s a big difference between a small-town club that is able to rent space cheaply from a church or senior center and charge as little as $3 per person, and Honors Bridge Club in New York, where rent is sky-high and the entry fee is $30. When both of those clubs go virtual, they bring their real-world issues with them.

That’s why membership in virtual clubs is restricted. Coles didn’t want to create a marketplace where the low-cost clubs drive down the price for everyone. The goal is to help clubs stay in business, not put them out of it. Another reason for the restriction is social: “We want to create an atmosphere where you’re playing with your friends,” Coles said. “If you want to play in a big game with lots of strangers, there are plenty of other games on BBO like that.”

Some large clubs are finding that in the virtual world, their limited games have become much more popular, while their open games have gone down. This has been the experience of both Sam Marks at the Bridge Club of Atlanta and Dave Brower at the Portland (OR) Bridge Club, who joined the program April 1.

Brower speculates that the open-game players not playing in the virtual club games fall into two groups: those already comfortable with BBO who don’t need the comfort zone of playing against familiar people, preferring to compete in larger fields; and those who have deeper resistance to playing online at all. After several weeks in the program, he noted an uptick in open game attendance in late April. “I think open-game players are getting bored of being home and figuring out how to work a computer,” he said.

For Marks, the program began a bit sooner than its official start date. The day the Columbus NABC was canceled, March 12, he made the decision that the next day would be the last for Bridge Club of Atlanta. Immediately concerned about what he would do during the shutdown, he sent an email to Jay Whipple, The Common Game innovator and former ACBL president, who was already working on a way to bring clubs online. Coles estimates Whipple put in hundreds of hours of volunteer service getting virtual clubs off the ground.

Marks participated for a week and a half in the tests Whipple was running before the program got the green light. Others participating in the testing phase included Uday Ivatury of BBO, Silvana Morici of Sagamore Bridge Club in Syosset NY and Jeff Bayone of Honors.

“We made every mistake in the book, but we learned as we went,” Marks said. “It was a team effort. Then we had to explain it to our players.”

Morici created tutorials for clubs on how to get set up to run virtual games, and for players on how to enter them. She has also been offering these instructions via Zoom sessions. She answers over 200 emails, texts and calls a day from players and club directors needing BBO support. Marks and Brower likewise said they have been doing more work running virtual clubs than they did before.

“For my club, this has been a blessing,” Morici said. “It is so important that we stay connected and that these days feel more normal than abnormal. Keeping my senior players connected socially and playing bridge daily promotes a healthy routine aimed at improving their spirit, exercising their brains and improving their immunity.”

While the virtual clubs were initially restricted to member lists, many have agreed to share their member lists with other clubs. This has taken various forms. The most common one enables a smaller club that doesn’t want to take on running its own online games to grant its list to a larger club, giving its members a place to play. For example, members of the Hilton Head Island (SC) Bridge Club can play in Bridge Club of Atlanta’s games.

There are several other types of relationships between peer clubs. In the Portland area, the two large clubs, the Ace of Clubs and Brower’s Portland Bridge Club, shared their lists with each other. The Ace runs games at 10 a.m. and PBC at 1 p.m. and a couple evenings, so they aren’t ever competing for the shared pool of players.

In Central Illinois, several small clubs in Unit 208 banded together. With the assistance of tournament director Rick Beye, Lori Moore of Bloomington/Normal DBC, Ann Caparros of Bridge Club of Springfield and Mary Stuart of Champaign DBC formed a collective. “We now see that by collaborating and pooling our efforts and ideas, we can reenergize bridge in our communities,” Moore said. “We have pivoted from a club-centric way of thinking to understanding that collectively we are our most powerful tool: We can play in new ways, teach in new ways, think in new ways.” 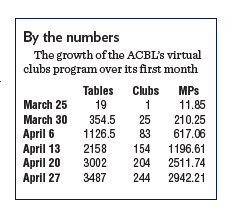 Leave it to Morici to take the concept of pooling to a new level. She formed an alliance with four other large bridge clubs in Florida, New Jersey, New York and California to create the largest virtual club. Alliance Bridge Club averages 180 tables a day. It is open to members of Jourdan’s Bridge Club in Delray Beach FL; Essex Bridge Center in Livingston NJ; Sagamore; The Bridge Deck in Scarsdale NY; and Beverly Hills (CA) Bridge Club.

Coles is especially impressed with the work BBO has done to make all this happen. “They worked tirelessly to make many development changes quickly while also dealing with a huge influx of new users,” he said.

For club owners struggling to stay in business, the program has been a godsend, even though it doesn’t replace the income clubs were getting under normal operations, Marks said. “It’s keeping me afloat.” Though he still expects some clubs will fold, especially the longer people remain at home, the initiative has at least reduced the scale of the disaster facing clubs.

“This has enabled us to throw a lifeline to the clubs – and the players,” Marks said. “They have been so grateful just to have something to do.”