“’Twas the night before Christmas,
Two guest in our house
Had started to play bridge
With me and my spouse.

“Please tell me,” she shouted,
“Why didn’t you double?
“’Twas plain from the start
That we had them in trouble.”

“ ‘Tis futile my dear,”
Said I, taking no stand,
“To discuss it with you—
Let us play the next hand.”

“Remember next time,”
Said she, icing a frown,
“To double a contract
That’s sure to go down.”

So I picked up my cards
In a downtrodden state,
Then I opened One Spade
And awaited my fate.

The guy sitting South
Was like many I’ve known;
He played and he bid
In a world all his own.

“Two diamonds,” he countered
With scarcely a care
The ace in his hand
Gave him courage to spare.

My wife, she smiled faintly,
And tossing her head,
Leaned over the table;
“I double,” she said.

And North, for some reason
I cannot determine,
Bid Two Hearts as though
He were preaching a sermon.

I grinned as I doubled,
Enjoying the fun,
And turned round to South,
To see where he would run.

But South, undistressed,
Not at a loss for word,
Came forth with Two Spades—
Did I hear what I heard?

The other two passed
And in sheer disbelief
I said, “Double my friend,
“That’ll bring you grief.”

South passed with a nod,
His composure serene;
My wife with a flourish
Led out the heart queen.

I sat there and chuckled
Inside o’er their fix—
But South very calmly
Ran off eight straight tricks!

He ruffed the first heart
In his hand right away
And then trumped a club
On the very next play.

He crossruffed the hand
At a breathtaking pace
‘Til I was left holding
Five spades to the ace.

In anguish my wife cried,
“Your mind is growing old,
Don’t you see six notrump
In this hand is ice cold?”

By doubling this time
I committed a sin
It just goes to prove
That you never can win. 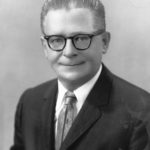 B. Jay Becker (1904-1987) was named ACBL Life Master #6 in 1936 when the rank of Life Master was instituted. The first 10 players were selected because of their record in tournament play.

He won the Fishbein Trophy for best performance at the Summer NABC in 1972. During the years when the Master Invitational Individual was a prestigious major championship, Becker had the best record of any player, winning it in 1937 and 1948 and placing second in 1934, 1941, 1949 and 1955.

Becker’s performance in the 1981 Vanderbilt was one of the highlights of the Detroit Spring NABC. In leading his team to victory in one of the world’s toughest events, he earned high praise from a teammate who does not praise lightly. “He has an effect on the whole table,” said Edgar Kaplan. “It’s as if he has a muting effect on everyone. He conveys the air of a man who knows he’s going to make what he bids. Opponents don’t double him even when he’s sacrificing.”

In the bidding Becker was the Great Conservative, grinding out good results with a sound and careful style.

He avoided complex conventions, relying instead on impeccable judgment. His remorseless accuracy at the bridge table made him a singular legend of the game – one who was admired and respected for his quiet demeanor and immaculate behavior as well as for his monumental technical skills.

Becker was born in Philadelphia. He trained as a lawyer and took his law degree from Temple Law School in 1929. In 1937 he abandoned law and took up bridge as a full-time career. He never regretted giving up the law career he might have had. “Bridge was my life,” he said a few months before his death. “I never wanted to do anything else.”

Over the years he managed three New York clubs – the Cavendish, the Bridge Whist and the Regency. He was associated with the Card School of New York and directed bridge activities on cruises.

For more than 30, years Becker was a nationally syndicated columnist, having been invited by King Features Syndicate to take over Josephine Culbertson’s column when she died in 1956.

Four years before his death, the column began to carry the joint byline of him and his older son, Steve, NABC championship and former Bulletin editor.

Becker was a contributor to The Bridge World and the Bridge Bulletin and was a member of the Editorial Advisory Board of the Official Encyclopedia of Bridge. He also became a member of the ACBL Laws Commission in 1954.