Hall of Famer Fred Hamilton played this deal in the 2011 World Championships. He held:

What is your opening bid? Personally, I prefer 1NT. I know it is off-shape and that the spade stopper is non-existent, but I’m afraid that if I open 1♦, I will have a rebid problem. I won’t be able to show 15 points if my partner responds 1♠. I’m too weak to reverse to 2♥, too strong to rebid 1NT and too wrong to rebid 2♦. That said, I don’t think 1♦ is a mistake, and in fact, that’s what Fred opened.

His left-hand opponent overcalled 1♥, and partner bid 2♥. What’s that?

Bidding the opponent’s suit in such an auction is obviously not natural. It says nothing at all about hearts. It shows diamond support and at least invitational values. The rest of the aucti
on is not on record, but Fred ended up declaring 6♦ (no more opposition bidding). The ♥K was led, and Fred saw:
♠ A K 7
♥ A 5 2
♦ J 10 7 3
♣ A 6 4

There appear to be two inevitable heart losers (declarer can throw only one of his hearts on dummy’s clubs). Do you see any chance?

If East started with a singleton ♥10, that would surely ease your pain. More realistically, if West is short in spades, there is a way to make this
contract. How? Just watch.

From the 1♥ overcall, you know that East has at most a singleton heart. Accordingly, there is no choice but to win the first trick. If you play low,
West can continue hearts and give East a ruff. Thankfully, East follows to trick one (unfortunately for declarer, with a low heart — not the 10).

Declarer drew trumps (3–1), cashed the top clubs from hand, crossed to dummy’s ♠A, cashed the ♣A, throwing a heart. He then continued with the ♠K and another spade. East
produced the ♠Q, and the deal was now over.

Why is it over? Declarer throws away a heart and allows East to win the ♠Q (a loser-on-loser play). Now, East is out of hearts and must play a black suit. Declarer throws his last
heart loser and ruffs in dummy to claim 920. That’s how the play went, but it turns out the defense had made a mistake. 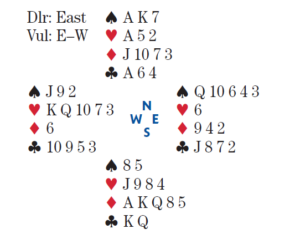 This was the full deal. After the ♥K lead, declarer has no chance on the actual layout. West had to cling to all three of his spades to keep his
partner from getting endplayed in that suit. However, on one of the trumps, West carelessly parted with a spade (he could have safely thrown two low hearts). If West did keep all his spades, it is East who would have been put to the test. After declarer strips the hand and plays the ♠A, ♠K and then another spade, East would have to resist the lazy play of the ♠Q. If he plays his queen on the third round, he is subject to the endplay. He has to play low on the third spade so that West is the one who would win the trick, thus avoiding the endplay.

Many bridge deals are won due to an opponent’s error or carelessness. The fact that West made a poor discard takes nothing away from the beautiful plan executed by declarer.