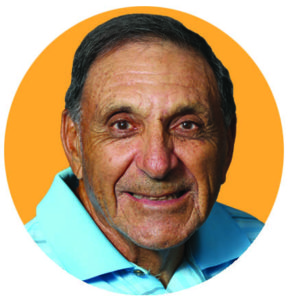 Bidding commentary: East’s passed-hand leap to 2NT shows a balanced 11 or 12 high-card points, usually 11 since most 12-point hands are opened these days. Incidentally, a two-level response in a major, 2♥ in this case, passed-hand or not, guarantees at least five cards in the suit.

Lead commentary: Normal. How can South know that a heart lead is heading smack into East’s strongest suit?

Play commentary: After winning the opening lead, East starts spades by leading the jack, the high honor from the short side.

Defensive commentary: After winning the ♠A, South counts declarer for four spades, three hearts and at least two diamond tricks for a total of nine running tricks as soon as declarer or dummy gains the lead. If South entertains any hope of defeating this contract, it must be in clubs and must be right now! East, a passed hand, has already turned up with 9 HCP (the ♥A K J and the ♠J) and cannot have the ♣A. If North has the ♣Q as well, a shift to the ♣K might really hit the jackpot and defeat the contract. Go for it! As it happens, the defenders can race off five clubs and defeat the contract one trick.

Counting declarer’s tricks and points is a must-do. Try it.

Bidding commentary: South’s 3♥ bid is preemptive, resembling a 3♥ opening bid. Some play the direct 3♥ response to a minor-suit opening bid as a splinter jump, showing a singleton heart with strong (five- or six-card) support for opener’s suit. It is a game force. A good general rule dealing with splinters is this: If the opponents are in the bidding, you can only splinter in their suit(s).

Defensive commentary: East sees four defensive tricks if West can be persuaded to cash the ♠K. If East plays a low spade at trick one, West is apt to switch to a club, trying to build up a trick in that suit before the ♠Q can be established for a club discard. East can see that a minor-suit shift could be disastrous. It is up to East to take charge and play the ♠10 at trick one, “faking” a doubleton. No matter. Once West can be tricked into cashing the ♠K, the contract is defeated.

Every so often, third hand should encourage partner to continue the suit that has been led even though third hand has worthless cards in the suit. Why? Because third hand can see that if partner continues the suit, the contract will be defeated, but he if shifts, disaster could ensue. Yes, little white lies are a part of this game, too.