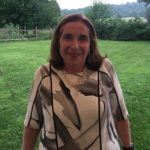 The auction begins with your partner passing and your right-hand opponent bidding 1♠.

Your choices are to bid 1NT or to pass. You decide to pass because with spade shortness in the other two hands, you feel the auction will continue. LHO passes, and your partner bids 2♣. You decide to bid 3NT, ending the auction.

LHO leads the ♦J, and the dummy comes down:

How should you play? Well, you have eight tricks to start. You can play a spade to the jack in your hand, and you likely have four heart tricks, two diamonds and the ♣A.
Where should the ninth trick come from? What do you know about the hand?

Well, RHO has spade length, and LHO likely has length in diamonds, based on her decision to lead her own suit instead of spades, the suit he partner opened. RHO has almost all the high cards (she opened the bidding), namely the ♦Q, the ♠A Q, and the ♣K. The only honor cards whose locations are in doubt are the ♣J and the ♥J.

What do you know? Well, you need to play spades from the dummy, and to need to make sure the opponents cannot get to each other in diamonds. Therefore, even though you hold the ♦A and the ♦K, you should duck the first trick. This is an important play theme. If you have to give up the lead twice in notrump, duck once even if you have two stoppers in the suit, making it harder for the opponents to reach each other in that suit.

So the ♦J wins the first trick, and dummy’s ♦K wins the second. RHO plays the ♦Q at trick two. Let’s think: That likely means she had three diamonds to start; with a doubleton, she would have unblocked the ♦Q at trick one. What should you do with this information? Let’s see how the remaining suits break first.

You win the ♦K in dummy and play a spade to your jack, which holds. Next you cash the top hearts, noting that RHO plays the jack on the first round of the suit, and then discards two clubs and a spade on the next three rounds.

So what do we know? RHO began with five spades, one heart, three diamonds and, therefore, four clubs. This will guide your following play. You need to cash the ♦A next to take away RHO’s exit card when she wins the ♣K. Then you should play a club to dummy’s ace, and exit with the ♣Q.

Success! RHO wins the ♣K as LHO follows with the jack. RHO is stuck: because you took away her last diamond – her exit card – she will have to play clubs allowing you to run dummy’s winners, or cash the ♠A and play another spade which you will win with the king in your hand.

Well played! You counted out the entire hand. You knew the distribution when RHO unblocked her ♦Q at trick two. You knew the location of all the high cards at trick one except two jacks. And you knew you had to break the communication between the opponents by ducking the first trick even though you had two diamond stoppers.

Here is the entire deal: