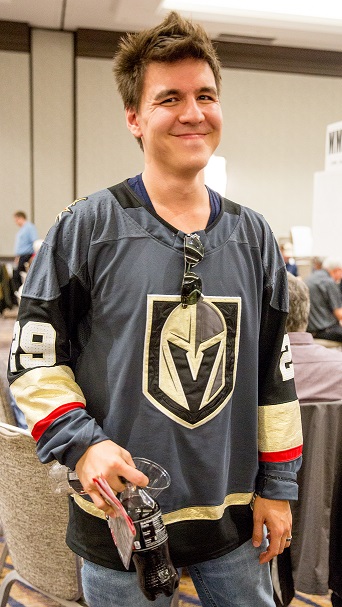 When someone wins $38,000 in a single day of “Jeopardy!” it’s a big payday. James Holzhauer changed the face of the game in April when he averaged more than double that across his first 22 wins. By that time, when he got a two-week hiatus for the teachers tournament, he’d won $1.69 million and held the 12 biggest single-day winnings. He was second to Ken Jennings only in length of streak, 74 games, and total winnings, $2,520,700 – a record Holzhauer was poised to break on day 33 when his streak ended June 3. Holzhauer won $2,462,216 in 32 games.

As Holzhauer became the star of the show, “Jeopardy!” viewers learned a lot about the professional sports gambler from Las Vegas. One thing that didn’t come up in the first 27 times Alex
Trebek interviewed him is that he’s a bridge player. Bridge finally got a mention on day 28 – Memorial Day, in case you missed it.

Holzhauer has only played in a handful of bridge tournaments, mainly in the Las Vegas and Chicago areas – more than three-fourths of his masterpoints are from online play – but he
went to the San Diego NABC in 2017. He made it into the Daily Bulletin there in a photo spread about fashion, and that was enough for him to be recognized when he began on “Jeopardy!”

Holzhauer began playing young despite not having any bridge players in his family. “I just woke up one day when I was maybe 14 and decided I was going to learn to play bridge,”
Holzhauer says. “I am self-taught at almost everything I do.” He began playing online.

His family was hosting a foreign exchange student from Germany who noticed Holzhauer playing online. “This must be a cultural difference,” the student said. “In Germany, only grandparents play bridge.”

Holzhauer grew up in the Chicago area. When he came home from elementary school, he would sit with his grandmother and watch “Jeopardy!” It was his dream to be on the show, and he promised his grandmother that he would make it. He’d been taking the online test every year for as long as it’s been offered and three times got invited to audition.

In the meantime, he also tried another TV trivia show: “The Chase,” where contestants compete against a villainous trivia champion known as The Beast. Holzhauer and his team of three appeared in 2014 and won $175,000. In a 2017 tweet, The Beast called Holzhauer the best player he ever faced on all versions of the show. James’s wife, Melissa Holzhauer, appeared on “Who Wants to Be a Millionaire” and won $28,800.

It was almost two years after his last audition when he finally got called to appear on “Jeopardy!” He decided he needed to practice using a buzzer, so he had a friend build him one. He spent a year practicing for “Jeopardy!” and studied trivia in the children’s section of the library. “Books that engage children, they come at you rapid-fire with different subjects, and I’ve seen lots and lots of answers that came straight from that.”

As Holzhauer became a “Jeopardy!” star, articles appeared all over the news about him. Many of them focused on his strategy for building big jackpots: going after the biggest-value clues first to build a substantial bank and then hunting for the Daily Doubles, usually risking everything on the first one and large amounts in Double Jeopardy. Sometimes it seemed he’d already put the game out of reach before his opponents figured out what’s going on.

But Holzhauer beat his opponents to the buzzer more than three-fifths of the time, and he was right 97% of the time. It’s not hard to find 80% of the Daily Doubles when you control the
board that amount of the time. When you know all the answers and are unbeatable on the buzzer, does it even matter what order you tackle the clues?