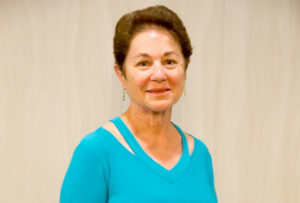 Would U.S. Women’s bridge have the structurally sound foundation it has for international competition? Would the United States Bridge Championships – open, Women’s Seniors and Juniors – be as organized and enjoyable for the competitors? Would there be vugraph? Etc. and so forth and so on …

Now imagine the cost if the bridge organizations that benefitted from Jan’s more than 30 years of volunteerism had to pay for services rendered.

“Nature abhors a vacuum,” Jan says. “I like to think someone would have filled it.” Maybe, but most certainly not with the utter competence that Jan brings to every task she undertakes.

For these and a resume of volunteer contributions a mile and a half long, the ACBL Board of Directors named Jan the organization’s 2018 Honorary Member of the Year.

When the announcement was made at the Goodwill Meeting on Monday evening, she says “they stood up and clapped and everything! I was surprised. It’s nice to be acknowledged. There are so many wonderful people doing so many wonderful things.”

Presented with the Blackwood Award for service to bridge and inducted into the ACBL Hall of Fame in 2012, Jan is the go-to resource for information about anything in the bridge world.

In the early 1990s, Jan was one of the founders of the ACBL’s Women’s Committee, which oversaw the process for selecting teams for world championship play. In addition to creating a seeding point scale, the committee – “Kitty Cooper was the driving force here,” says Jan – started the child care program at NABCs. She served as the chair of the Women’s International Team Trial Committee; subsequently, she brought those same organizational skills to the Senior International Team Trial Committee.

Jan and the USBF are almost synonymous: When the organization was formed, Jan served as a board member and as its president. And when she exhausted term limits, the position of chief operating officer (non-voting) was created for her. She serves today as COO, secretary and web master, and is responsible for organizing sites for the Open, Women’s, Senior and Junior trials among other things.

Of the contributions Jan has made to bridge, she is proudest of vugraph. She’s worked with BBO and the ACBL since 1994 to bring high-level bridge to a mass audience online. The phenomenon has come from single-table coverage of the Vanderbilt final to full-match coverage of the quarterfinals, semis and final of all major NABC team championships as well as all U.S. Bridge Federation championships.

She calls herself an improver: “Everything is a learning experience. We get better and better each time.”

Martel looks to the challenges ahead. At the top of the list is fundraising. The ACBL, which has historically paid $165,000 in annual membership dues to the World Bridge Federation, is gradually transitioning that obligation to the three national bridge organizations in North America: the USBF, the Canadian Bridge Federation and the Mexican Bridge Federation. As the largest of the NBOs, the USBF bears the lion’s share of the bill.

There will be a line item on ACBL membership statement enabling members to support international bridge by donating to the USBF if they wish, she explains.

“We don’t have money, but we have bridge stars who have expertise. How can we use that to give value in exchange for supporting international bridge?” she ponders.

She floats a couple of ideas, including a fantasy bracket for the USBF trials for supporting members.

“That was an idea suggested by Jay Whipple,” she says, crediting the possibility posed by the 2018 ACBL president. “And the winner could field a team and play the trials champions.”

She pauses. “Or how about reserved kibitzing seats at championships?”

Also on Jan’s to-do list for the next year or two: finding a successor.

She has been the non-playing captain of four Bermuda Bowl Teams – the most recent being the 2017 victory in Lyon, France this past summer.

On her own time, Jan is an avid equestrian. Oh, she loves her horses! She proudly shares baby pictures and videos of Fairy, a chestnut mare who foaled during the 2016 Summer NABC in Washington DC. Born on the same day as Jan’s father, Fairy’s full name is Laissez Faire. (Jan’s dad is Nobel Prize-winning economist Milton Friedman.)

In June, Martel plans to ride for membership in the Century Club, which recognizes riders and horses whose combined age totals 100 years or more. Her mare, Lalique, is 25 years old.