I first wanted to learn to play bridge when I was 5 years old.

For more than 40 years, my grandparents played two or three nights a week in what always felt like the most important and lived-in room of their house. My grandparents didn’t live far from my parents, so I was there quite a bit, and every time they played, I desperately hoped finally to make sense of this magical game that so captivated them and their closest friends.

I can still remember the Tareyton cigarettes, club sodas and mints arranged strategically within reach of the brown vinyl card table. I would sit behind my grandmother for what seemed like hours, trying to make sense of the mysterious way she called out numbers and suits as the bidding went around the table. My grandfather, sitting across from her, would bid with a certain sternness that left me with the impression that bridge was a serious game for serious people. His intensity impressed upon me a lingering fear that bridge would be impenetrable, and my hope of learning it would prove fruitless.

I spent the next several decades in a terrible limbo, caught between a profound desire to learn the game, and a sense of utter hopelessness about how to ever start. I was always on the hunt for beginner classes. Before I found Peggy Tatro, the director at Terra Linda Bridge Club in San Rafael CA, I had several comically failed attempts at learning. In one – a class promoted for absolute beginners – 20 of us crowded around a single table as we watched others play bridge. I didn’t learn to play, but I did learn that watching people toss cards into the center of a table while throwing around baffling new jargon (“dummy” – what? “finesse” – huh?) is not an effective teaching method.

Learning the game is so much more than knowing the rules. Before I took Peggy’s class, I didn’t have a partner and didn’t know how to find one. I didn’t know where the games were, and I truly didn’t know how fun and rewarding bridge can be. Peggy gave me all of this, and even had us playing on our first day of the class.

I know now that learning bridge takes four elements: desire, which I had in spades; a great teacher like Peggy, a true diamond ; a welcoming place like Terra Linda, a fabulous club that supports new players; and perhaps most importantly, the generosity of mentors, the real heart of this game.

Without the guidance of so many wonderful mentors (and without the patience and kindness of Henry Kingdon, Cyrus Ansari, Mykaell McCarthy and Bob Liss), I would not be where I am today in my understanding of this game. Each one of these people (and many others) have made such a huge difference in my life, not only by being so generous with their time and knowledge, but also by being so forgiving of my mistakes. I can laugh now about the time when I was learning exclusion Blackwood, and put my partner in slam in his void suit. 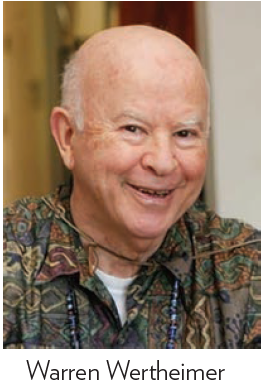 I have so much gratitude for all of these mentors, who have tirelessly helped not just me, but many of the new players coming to the game. But
here, I want to take a moment to honor one of the most wonderful mentors I was ever lucky enough to have: Warren Wertheimer, a Gold Life Master, and a beloved member of Unit 508 in Marin County CA, who died April 20.

In June, hundreds of friends and family members gathered at a memorial to say their final goodbyes to Warren, who wasn’t just an expert bridge player, but was also a Harvard-educated lawyer, successful businessman, loving family man, athlete, author and philanthropist.

By the time I started playing bridge with Warren, I was still making mistakes on a regular basis. With profound kindness and warmth, Warren would calmly let me know when I did something wrong, and always with a smile. Like the greatest mentors in this game, he never forgot positive reinforcement when I got it right.

There is so much I can say about Warren. If I ever again am about to bid too aggressively at unfavorable vulnerability, I’ll recall his gentle tapping on the board of that last game we played together. There are just so many ways he helped me get better. But what was most essentially Warren wasn’t just his wisdom, artfulness and skill, but the way he made bridge fun.

At our last game a few days before he died, he was smiling from ear to ear. He always kept things in perspective, and he believed it was more important to be kind than to win. Warren didn’t just teach me declarer play and defense; but with his profound joy and endless smile, he never let me forget that while the goal of the game is to win, it’s not the winning that matters. When an opponent was being unkind, he would say that they were “crying out for love.” It was impossible to shake his composure. And, in his trademark green ski hat, he’d drink his water out of a vodka
bottle.

We all thought we had more time with Warren. More games. More laughs. That was not to be. But I am grateful that my last words to him were
“thank you.” And I am grateful to all the mentors who live by Warren’s trademark words, “It’s just a damned game.” Yes, it is, Warren, the most beautiful damned game in the world.